As a youth growing up in Lvov, Ukraine, New York Vice President Boris Gimelshteyn had a strong desire to become an engineer. “I was greatly inspired and motivated by my father, who was also an engineer,” he said. After 45 years in the business, he remains as passionate about the profession as ever.

Gimelshteyn’s interest in buildings began when he got a job as a bricklayer following high school. The fieldwork spurred him on to pursue a career in the trades, so he enrolled in the Industrial and Civil Construction Technicum, Lvov, from which he graduated with a construction technician’s degree. Gimelshteyn eventually went on to complete a master’s degree in civil engineering from the Polytechnic Institute in Lvov. For the next 13 years, he worked as an engineer at the Institute of Design and Construction Technology in his hometown, where he was responsible for the design and reconstruction of new and existing industrial buildings as well as on-site representation.

In 1979, he and his family traveled to the U.S. in search of better opportunities. Soon after arriving, he joined Zetlin-Argo and worked with Lev Zetlin, the founder of Thornton Tomasetti legacy firm Lev Zetlin Associates, who had by then sold LZA and was leading a small consulting firm. Gimelshteyn’s career at Thornton Tomasetti officially started in 1989 when he joined Peter Corsell Associates, which merged with the firm in 2001. With the merger, he brought several decades’ worth of structural investigation and restoration work experience to the Building Performance practice in New York.

As he marks 25 years with the organization, Gimelshteyn recalls the early days and some of the many projects that have kept him busy during his long career.

How did you come to Thornton Tomasetti?
After arriving in the U.S., I saw an ad in the newspaper that Dr. Lev Zetlin, of Zetlin-Argo at the time, was looking for engineers who could perform building investigations and prepare field reports and restoration details. I remember being interviewed as if it were just yesterday. Dr. Zetlin showed me several adverse building conditions and asked me to develop concept sketches outlining their resolution. He was even generous enough to give me 30 minutes to resolve these—no pressure! Upon his review and acceptance of my preliminary sketches, he asked me to prepare alternative solutions to resolve the same problems. This was indeed the toughest interview of my career, particularly because I was new to this country, like in the novel “Stranger in a Strange Land.” Nonetheless, I prevailed and as a result, I was hired.

In 1985, as Dr. Zetlin’s health was deteriorating, he advised me to join Frank Lisanti, a structural engineering firm specializing in all aspects of building design. During my employment at Lisanti, the firm coordinated some projects with Peter Corsell Associates, which provided waterproofing and restoration recommendations to Lisanti. In 1989, Mr. Lisanti elected to terminate his firm due to health reasons. Because of my involvement with Mr. Corsell, I was invited to join that firm in February 1989 and I worked there for 12 years until it merged with Thornton Tomasetti in February 2001.

What was the first project you worked on and with whom?
My first project at Thornton Tomasetti entailed a Local Law 11/98 façade and balcony restoration of six 30-story residential buildings at the Lincoln Towers complex on Manhattan’s Upper West Side. I worked with Manny Velivasakis and Gary Mancini. The Lincoln Towers buildings had many adverse cavity wall and balcony conditions, which required a thorough field investigation and preparation of restoration details. For each building, I recommended that a forum be held, where board members, management and residents posed many project-related questions to the engineer and contractor. The ‘forum’ approach has been successfully implemented on various other projects since then. 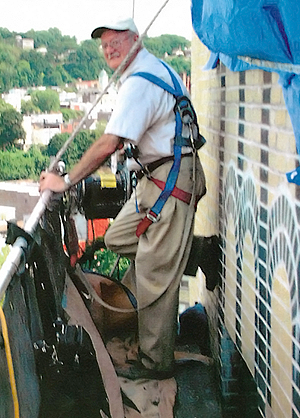 With 45 years in the profession, mainly focusing on structural investigations and restoration work,
Gimelshteyn has spent more time on a swing stage than many engineers have working in or out of the office.

How did you get involved in Renewal work?
The work that we do is most interesting because it demands the engineer to understand various building designs, such as cavity wall systems, composite walls systems, curtain wall systems, stone walls, etc., as well as many different building materials. The engineer must attain knowledge of grandfathered construction versus new construction methods and requirements. The engineer must also adapt to diverse building usages, such as medical facilities, hospitality buildings, office buildings, educational institutions, and often perform the work while the building is occupied. There are numerous adverse conditions that the engineer must address—leaks, façade issues, building framing, windows, roof investigations, as well as countless others. And the engineer must participate in the restoration process from start to finish. These factors ensure that each project will be challenging and stimulating.

What were the most memorable projects you worked on and why?
Working with Dr. Zetlin was a great experience and I acquired a vast amount of knowledge and skills during those years. Zetlin-Argo specialized in first-response, disastrous or catastrophic, services and also provided consulting services to various clients and other engineering firms. The projects we took on were difficult in nature and are well known in the industry, such as the Hyatt Regency Hotel walkway collapse in Kansas City, Mo. in 1981 and the collapse of the Mianus River Bridge, Interstate 95 in Greenwich, Ct. in 1983. For both of these projects my duties included verifying field conditions, preparing a report, providing field measurement and sketches, comparing the components that failed with the design drawings and participating in on-site meetings. In addition to these first-response services, I participated in many general restoration projects as a consultant.

Perhaps the most enticing factor that made me join Corsell Associates was the types of projects they administered at the time, many of which involved investigation of famous hotels and casinos in Atlantic City, N.J. Our scope of work consisted of various investigations and restoration work for numerous complicated existing problems. Another big project we took on at Corsell was the Gulf and Western Building where we provided specifications and drawings outlining its façade restoration. It was a 50-story curtain wall building that was under designed for wind load. Because of this, on a windy day the building was observed to significantly sway at the top. As a result, various panels would fly off the building. We were retained to investigate this condition and provide short-term recommendations. Later, this building was bought by Donald Trump and was completely redesigned.

Currently, my team and I are involved in perhaps what I might deem the most challenging project of my career, the New York Presbyterian Hospital East Campus. We are administering restoration of 10 buildings where the degree of difficulty is very high, as all facets of the project must be coordinated between the owner/hospital management, engineer, construction manager and contractor. There are numerous restrictions working in this or any medical facility that can result in delays, such as medical undertakings which supersede construction, higher than normal demand for noise and dust control, inability to access certain work areas, resolution of discrepancies between CM and engineer, etc. Nevertheless, my team welcomes this and other challenges with an open mind. And as always, I have geared myself and my team up to provide the owner with the benefit of his/her bargain in every project we administer while striving to attain the highest level of quality in our work.

How has this industry/company changed since you started?
The methodology of project delivery has significantly changed in the industry. Decades ago, the basis of project delivery was strictly between the owner, architect and contractor. Nowadays the players also may include a construction manager. For the engineer of record this can become difficult because we no longer are the owner’s representative and very often wind up getting second-hand information. At the New York Presbyterian Hospital, for example, we are often not privy to discussions held between the construction manager and the owner, or, for that matter, between the CM and contractor. This can sometimes lead the contractor to be misled by the CM, if the engineer is not included. My team is currently involved in such a scenario at several major projects. Another element that has changed is climate conditions. As climate conditions are dramatically changing year to year, it is important to have an open mind with regard to new details/designs that will accommodate these changes.

What do you think will be the most important trend for our industry moving forward?
Sustainability will play a significant role in the industry for years to come. We have only touched the tip of the iceberg thus far.

Do you have any advice for younger staff?
My advice to younger staff is to have an open mind regarding environmental issues and sustainability. Also, make every effort to get hands-on field experience to acquire practical knowledge. Most importantly, you must put forth 100 percent effort in all facets of social and business life alike.