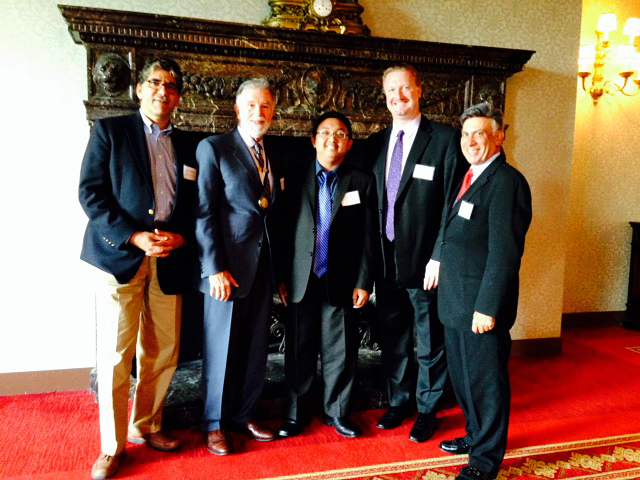 Abe Gutman, one of Thornton Tomasetti’s first principals and a member of the firm for nearly 45 years, was known for his intellectual curiosity and dedication to the engineering profession. That legacy will now live on in future generations through the Abe Gutman Memorial Scholarship, set up by Thornton Tomasetti with a $25,000 fund provided to the Concrete Industry Foundation to honor Abe, who died earlier this year. “Abe Gutman was a great engineer and a humanist,” Founding Principal Richard Tomasetti (second from left) said. “He understood that after all was said and done, our work is more about people than things. It is fitting that this scholarship will memorialize his name and his compassion for others.” The scholarship’s first recipient is Tenzin Getso (center), a graduate student at City College of New York, who received $2,000 to support his master’s studies in structural engineering and mechanics. Tenzin graduated from CCNY with a bachelor’s degree in civil engineering in December 2013 and works for GACE Consulting Engineers PC in Manhattan. With Tenzin and Richard at the Sept. 18 CIF awards luncheon are (from left) Principal Chris Christoforou, Principal James Feuerborn and Consultant Joel Weinstein. Scholarship candidates were nominated by a university dean or department chair and were graded on career goals, academic accomplishments and demonstrated interest in the integration of structural engineering and architecture. Recipients must also strive to make an impact on the structural/architectural design of buildings upon completing their degrees.