Over the course of her design career, New York Senior Principal Hi Sun Choi has built up quite a collection of awards for creative and complex projects. Recently, Choi received a different kind of honor. She was named a 2012 recipient of the Outstanding Asian Americans in Business Award.

Each year, the Asian American Business Development Center (AABDC) recognizes 50 Asian Americans with successful business careers for their achievements and contributions to their communities. “The honorees represent a microcosm of the best of Asian American entrepreneurship and professionalism,” John Wang, president of AABDC, said.

Choi and the other award recipients were honored at a black tie gala on June 19 at Cipriani Wall Street in Manhattan. Honorees come from multiple ethnic backgrounds and represent more than 50 industries and professions including finance, healthcare, telecommunications, hospitality and retail. Executives from such leading names in business as Pfizer, Deutsche Bank, Macy’s, GE, Aetna and Verizon were among the award recipients.

“I am extremely honored to be recognized by the AABDC for my contributions to the engineering profession,” Choi said. “But I would not have been in this position or able to go as far with my career without the support of my colleagues and mentors at Thornton Tomasetti, particularly vice chairmen Aine Brazil and Dennis Poon.” (Poon was a 2010 recipient of the award.)

Brazil attended the event, as did Newark Principal Chris Christoforou and Choi’s project team managers, associates Simon Shim and Cori Kwitkin. Also on hand were her husband, two sons and parents. “We had a good time,” she said. “My family, especially my parents, was so proud.” 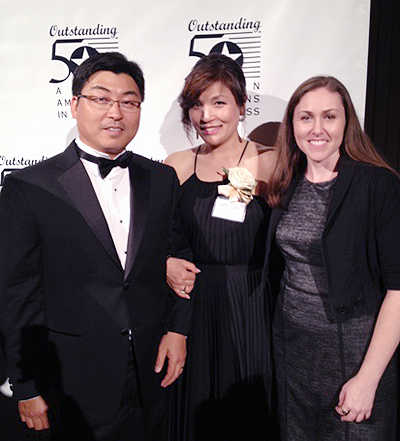 Choi received two nominations for the award. The first was from the AABDC committee, which she believes was the result of her leadership in the field of tall building design. Choi serves as one of the chairs for the Council on Tall Buildings and Urban Habitat’s Working Groups and is co-author of its outrigger design guidelines. The second nomination came from one of her former Cooper Union professors.

The award, and AABDC’s mission, is to highlight the achievements of Asian Americans, to help Asian American businesses compete in the mainstream marketplace and promote greater recognition of their contributions to the U.S. economy. Asian Americans, as well as other ethnic groups and women, tend to be underrepresented in the business world, and such continue to face challenges. But the 50 Outstanding Asian Americans in Business show that those challenges are not insurmountable.

“I think there are differences, but you have to overcome them,” Choi said. “When I made site visits early in my career, contractors were not always willing to listen to what I had to say, but it didn’t let that limit me.”

Choi hopes that her professional achievements will help to inspire the next generation of design professionals to dream big. “My advice to anyone starting out in business is that if you work really hard and love what you do, success will come,” she said. “But success shouldn’t be the primary goal. The focus should be on finding a career that you love and surrounding yourself with people who you can learn from, who challenge you and who you can call your friends. That’s what I did.”