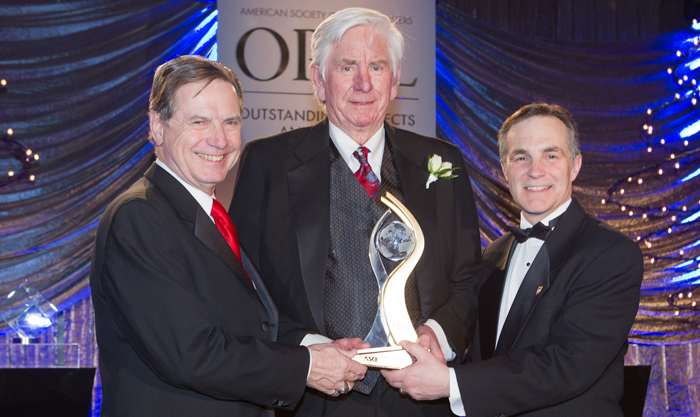 When the firm that bears your name is a known leader in innovative building design, industry awards and recognition come with the territory. Late last month Thornton Tomasetti Founding Principal Charlie Thornton was honored by the American Society of Civil Engineers (ASCE) with its Outstanding Project and Leaders (OPAL) Lifetime Achievement Award for Design. Thornton was one of five civil engineers to receive the OPAL award, given annually to those who, according to ASCE, “represent a model of achievement to which future generations of engineers aspire to match or exceed.” Attending the March 21st gala at the Renaissance Arlington Capital View Hotel in Virginia were Vice Chairman Aine Brazil, Managing Principal Wayne Stocks, Principal Mark Tamaro and Vice President Zach Kates, along with members of Thornton’s family.

“It was a wonderful event and a very nice honor to be presented with a lifetime award from ASCE,” Thornton said.

He also credited his work with the ACE Mentor Program, a program which he founded, that is designed to educate high school students about career opportunities in architecture, construction, engineering and related fields through mentoring. “ACE has helped to push 100,000 high school students in more than 200 cities into architecture, engineering and construction careers and raised $12 million in donations to fund scholarships that have enabled these students to pursue their dreams.”

While the presentation of the award was the evening’s highlight, the toughest part for Thornton, who is known for his ability to speak off the cuff, was sticking to a written script for his acceptance remarks. “ASCE insisted that we put down our remarks in writing to keep them down to two minutes,” he said. “I told them I don’t do written speeches, but they insisted. I guess I was OK, but even my daughter told me that I do so much better when I don’t read off index cards.”

As for the award, it is on loan to the Washington, D.C. office, where it will remain on display for the near term or at least until Thornton can find a spot for it in his trophy case at home. But it might be a while before that happens. He is due to receive another award next month; an honorary doctorate from his alma mater, Manhattan College.