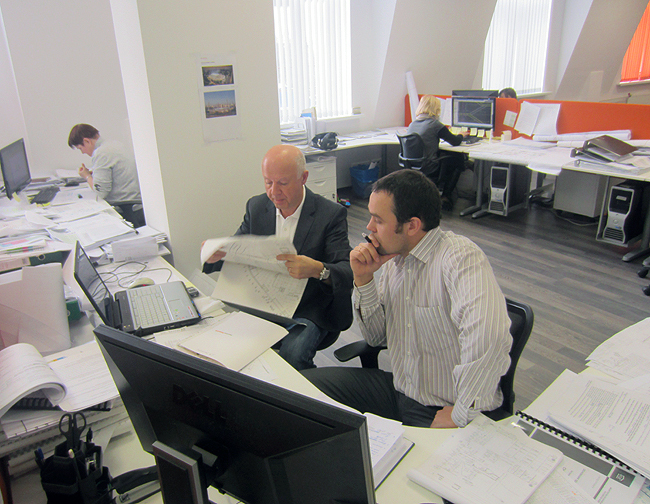 When New York Senior Principal Leonid Zborovsky started at Thornton Tomasetti 35 years ago this month, it was his civil engineering experience that helped him land his first U.S. job. But over the course of his career, Zborovsky has built up a diverse portfolio of structural design projects, including commercial and residential towers, aviation and marine terminals, educational facilities, sports and entertainment venues.

“The structural design process is a very interesting thing,” Zborovsky said. “And if you enjoy design, you will always be a designer, no matter how far you go in your career.”

A native of Kiev, Ukraine, Zborovsky has also overseen our work in the Russian Federation as director of our Moscow office. Under his supervision, the Moscow office has been implementing building information modeling and integrated project delivery technologies on several of its projects.

“Today it is all about providing high-quality services, while working under tighter time and budget constraints,” he said. “Advanced technologies enable us to make that happen.”

Recently Zborovsky talked about his long career with the firm, his favorite projects and how new technologies and construction methods are taking the art of building design into new directions.

How did you come to Thornton Tomasetti?

Before coming to the United States, I had been an engineer in Kiev, in what was then the Soviet Union. I had about 10 years of experience in structural and civil design, working on everything from buildings to bridges to highways. In 1978, I decided to move to the U.S. and was going through the immigration process in Italy. I wrote to about 20 engineering firms in the U.S., about 10 of them in New York, to say that I was coming. All 20 responded. Some said they couldn’t offer me a position because it was the end of the recession and they weren’t hiring at the time, but four or five firms invited me in for an interview once I got to New York. The problem was that I had no English language skills. I sat there with pencil and paper trying to show people that I was an engineer. So I grabbed a quick language course and in two months became much better. By then, companies started hiring again and I got three offers, one of which was (Thornton Tomasetti legacy firm) Lev Zetlin Associates and I accepted it. Interestingly, those other companies were much larger than Lev Zetlin, but neither exists anymore.

What made you choose Thornton Tomasetti?

With those larger companies, the staff was mostly older people. Everyone looked like accountants, with their sleeves rolled up and heads down. It was so quiet, you could hear an insect flying around the room. I was used to a more vibrant environment in Kiev, where engineers constantly talked about the work. Lev Zetlin Associates was like that. There was noise and excitement. The engineers were young and sharing ideas. I felt that as a young guy, there would be more room for me to grow at a young company. When it is the right place, you know it.

What was it like to work for the firm back then?

We were a medium-sized firm of about 20 to 25 people. In one of my early interviews, I met Abe Gutman, who spoke Russian a bit and that made me feel comfortable. Although the other firms had Russian-speaking engineers, Abe was very friendly and welcoming, as were Richard Tomasetti and Charlie Thornton. Len Joseph also spoke to me. Everything just clicked for me here, and it was a good feeling to be working on interesting projects. And I worked among some really talented people, such as Abe, Len, Paul Lew, Richard, Charlie, Manny Velivasakis and others. Talent was all around you. You could feel it, and I knew that if I stayed here, I could learn and grow.

What was the first project you worked on?

Around the time I started, the firm had gotten the Caruthersville Shipyard project in Missouri. It had a large civil engineering component and involved site planning, grading and drainage and dry dock and launch pad design. Abe needed someone to work with him who had civil engineering experience, particularly site grading and drainage which I knew very well. I think that was the reason that I was hired. After that, I started working with Len on Dravo Tower (now known as BNY Mellon Center) in Pittsburgh, Pa. Many of us worked on that project, which was very interesting and unique. It was one of the company’s first high-rise buildings.

What were the most memorable projects you worked on and why?

The World Financial Center in New York is definitely the most memorable. I was here about four and a half years when it started in 1983 as a civil engineering job, which is how I got involved. Slowly our scope expanded and it became a huge project with a top architect (Cesar Pelli). I was involved in all aspects of it.

It was a very challenging project. It is a large development that sits above the PATH (Port Authority of New York and New Jersey Trans-Hudson) rail line and is on the waterfront. We had to come up with interesting approaches for designing the foundations, columns and building supports. Every part of the project, including the façade, was unique. There was nothing standard about it. Probably the most interesting part was the Winter Garden, with its glass vaulted pavilion and planting pit for the palm trees. And we detailed everything. We worked on that building for several years, from 1983 to 1988, and we are still working there. Every year, we are called in for some project or another, whether it is putting a new tenant in the building or making improvements. We also did the redevelopment following Sept. 11.

To serve as project engineer for such a sophisticated, important and large-scale project was a tremendous opportunity for me. I met a lot of interesting people on that job and am still friends with many of them. They may have moved on to other firms, but they are still my clients. People want to work with partners that they know and have a history of successful projects together.

I love building design and detailing is probably my favorite part of a project. No matter what level you are in your career or how big the project, it is very gratifying to go back to your desk and develop sophisticated details. One of the projects that I am particularly proud of is the Saugatuck River Swing Span Bridge in Westport, Conn. We had to raise the swing and fixed span two feet above the existing support and reconstruct the bridge bearing. This was a moveable bridge, so there was a tremendous amount of details that needed to be done for this job. I really enjoyed that.

How has the business changed?

Building architecture has become more challenging and as a result, the structural design requires a more creative and sophisticated approach. Also, more projects geared toward building information modeling design technology to facilitate coordination and collaboration. And when the project is completed, clients can use that single model to manage the building. Working in the emerging Russia market, we see the desire to pick up the new technologies that are being used in the U.S. and in Europe. The use of automated design will continue to grow around the world.

What are the most important trends in our industry today?

Green buildings and sustainability have become very important. Russia is also trying to make inroads into sustainability. While government projects there do not have to meet sustainability standards, private sector projects need employ the latest green technologies and approaches if they want to attract international tenants.

Another trend is prefabricated construction. This is becoming more popular in China and Russia. In Russia, there is a huge program to construct affordable buildings. They have to remake nearly the entire real estate market over a short period of time. Most of the buildings are 50 to 60 years old and were not built to last, so they are deteriorating. So to create affordable buildings quickly, they need to be prefabricated and preassembled. Most buildings are constructed of lightweight concrete or steel panels that are created in the factory, which are brought on site and assembled together quickly. Some of these are tall buildings. There is one type of technology in which steel floor panels are completely equipped with the mechanical and electrical systems that is gaining popularity in Russia. Modular prefabrication is a big trend in Europe right now.

Do you have any advice for young engineers?

It is more difficult today to achieve a work/life balance than it was when I started out. But then if you love your job, both your personal life and career will be interesting and satisfying. I have been very lucky in that I have done a lot of different things during my career and I love what I do.