This One’s for the Ladies 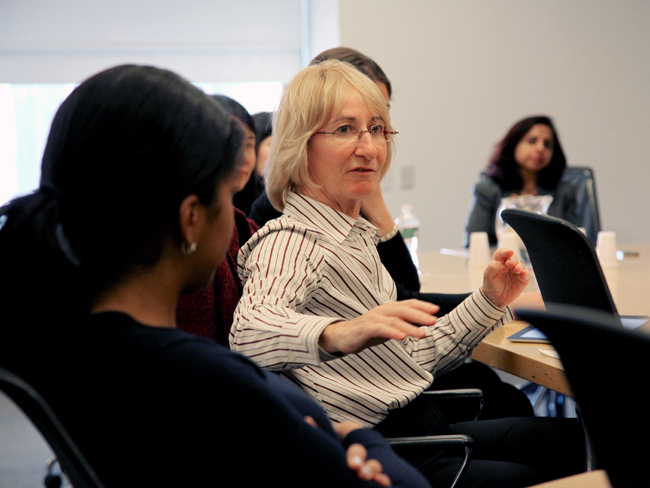 Vice Chairman Aine Brazil leads a discussion in New York on women’s issues in the workplace. Photo by Bess Adler.

Look around the room during your next project meeting or site visit and odds are the women are greatly outnumbered. The fact of the matter is there are far more men than women in the AEC industry. Yet firms like Thornton Tomasetti recognize the value of a diverse workforce. Bringing together people with different backgrounds, skill sets experiences and gender has, according to international surveys, been shown to increase productivity, innovation and growth.

Although Thornton Tomasetti has in recent years established a very strong track record in terms of the percentage of women engineers and architects among new hires, the goal is to improve retention and eventually see a greater number of women in senior positions. With this in mind, Vice Chairman Aine Brazil, Thornton Tomasetti’s highest ranking female employee, has started conducting discussion groups, known as Women @ TT (W@TT), with female employees across the firm. The idea is to provide a forum for women to talk about topics that are important to them, such as what it’s like to be a woman in a traditionally male field, how to set yourself on a path for professional growth, what can be done to attract other women to design careers and to our firm and how to achieve a work-life balance. So far sessions have been held in Chicago, New York and London and have included both technical and non-technical staff. Sessions in other offices will be arranged around Aine’s scheduled visits to those locations.

“We want to have a very positive, proactive group that helps women navigate through our male-dominated profession,” Aine said. “We need to make sure that we are creating an environment where, whatever life choices they make, these talented professionals—who just happen to be women—can make the most out of their careers and make important contributions to the firm.” 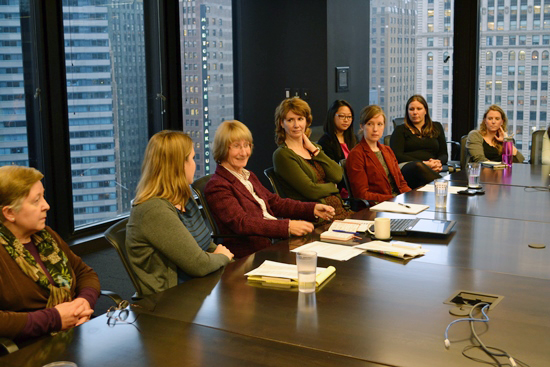 How to achieve a work/life balance was one of the topics discussed in Chicago. Pictured are (from left) Anna Liberman, Rachel Michelin, Aine Brazil, Lorrie Rogowski, Miry Kim, Suzanne Provanzana, Amy Lamb Woods and Julia Seitchik. Photo by Stacey Milch.

Statistics show just how wide the AEC gender gap is. According to January 2013 data from the National Science Foundation, just 12 percent of the civil engineering workforce in the U.S. is female. The number of women who are architects is only slightly higher. A 2012 survey conducted by the American Institute of Architects found that 17 percent of its membership is female, up from just nine percent in 2000. And while more than 40 percent of architectural school graduates today are women, a recent article in Architectural Record notes that women are noticeably absent in the C-suite, with just 17 percent of holding the title of principal or partner.

Gender diversity is better at Thornton Tomasetti. At the end of April, women comprised 24 percent of the total number of U.S. employees in structural engineering positions from intern to managing principal and accounted for 27 percent of all new engineering hires since 2010. As with the national rates, there are a greater number of women in architecture positions at the firm. Our architectural staff is 41 percent female, with women representing 47 percent of all new architects hired since 2010.

The idea for the women’s forum came out of a corporate strategic planning exercise in Kansas City last winter. Some of the firm’s managers were participating in a PEST analysis, identifying the political, economic, social and technical forces that could impact our business in the future. Senior Associate Jenifer Johnson was part of the team assigned to the social issues and ranked one potential topic—women in engineering—as having high impact and high importance to the firm. The male members of the group disagreed.

“They said that our firm had many female professionals and we were already doing a great job of understanding the differences between women and men in the workplace. They saw it as being a low impact, low importance issue,” Jenifer said. “That’s when Aine jumped into the conversation and explained how we need to bring more women into the firm and our industry. And when she started getting into specifics, such as the numbers of women versus men at Thornton Tomasetti, the guys began nodding their heads in agreement. They saw just how important this issue really is.”

Aine and Jenifer worked together to set up the sessions. Prior to each meeting, they sent out a few questions to get the attendees thinking: If there was one change that you would like to see made to improve the conditions for women at Thornton Tomasetti what would it be? What do you think the firm is doing right with respect to women? What can we do better to retain talented women? 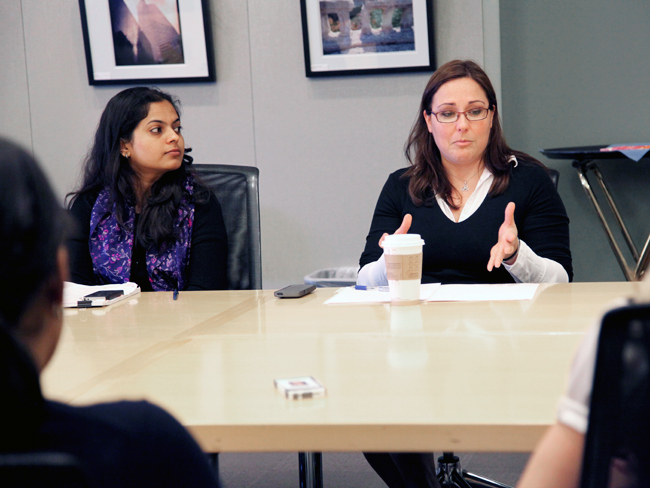 “Based on the feedback we have been getting, most women believe that Thornton Tomasetti is doing a good job of recognizing women in the workplace and no one feels as if she is being left behind,” Aine said. “In my 32 years at the firm, I never felt any hint of discrimination and I was given opportunities based on my abilities. As we grow larger and more women join the firm, we need to make sure that we continue to take the same approach.”

Ideas that have come out of the sessions are already being put into action. As a result of the Chicago meeting, changes have been made to our performance review procedures in which employees now receive evaluations in advance of the performance discussion. “Women process criticism a bit differently than men,” Aine said. “By giving them the opportunity to see their reviews in advance, women have more time to absorb the comments before discussing them with their managers.”

In one of the New York sessions, the suggestion of an informal mentoring program was met with much enthusiasm. Younger staffers expressed interest in teaming up with more senior female employees under a buddy system of sorts as a means of obtaining support and practical assistance as they build their careers in a male-dominated profession. “Some women feel left out or that they are not getting the opportunity for more one-on-one learning,” Aine said.

Another issue addressed was salaries. Many national studies indicate that women earn less than men, but with more women in the workforce and women outpacing men in terms of education, the gap is narrowing. “There is so much in the media about how women still make 80 cents on the dollar versus men,” Aine said. “Some of our women wanted to know how their salaries stacked up against the men. I assured them that there is not an unequal pay scale at Thornton Tomasetti.” Aine worked with Vice President, Human Resources John Fairbairn to examine that issue. They found that men and women in a given location with similar education and work experience in similar job roles are being paid comparable salaries. 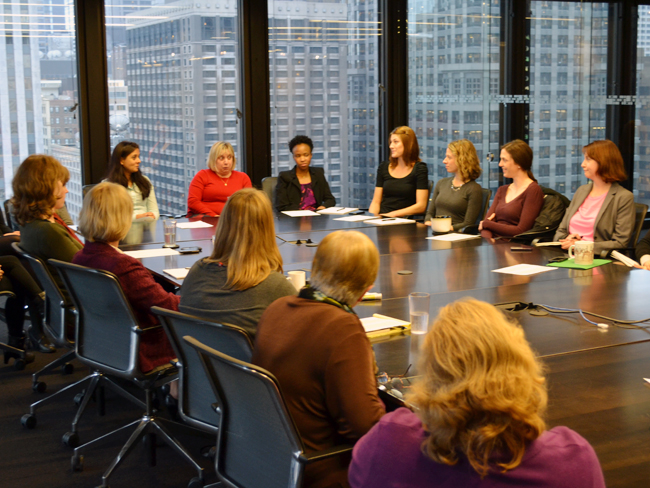 Work/life balance was also a hot topic in some sessions. Working moms talked about juggling family and job responsibilities and the need for flexible work schedules to accommodate both. There were also concerns that if they take time off for family, it would diminish their prospects for career advancement. “Sometimes women feel they are viewed as not being committed to their careers if they take time off to care for family,” Aine said. “The same can be said of men. We want to be known as a family friendly firm. In fact, we were one of the first among our peers to offer paternity leave. A lot of our managers go out of their way to accommodate staff who request time off. We recognize that it is to the long-term benefit of the firm to keep these people actively engaged. From the point of career advancement, they might be on a slower track at that point, but once they return, they can ramp it right back up again.”

The meetings were also part support group. In one session, a technical employee spoke of how she is often excluded when male colleagues invite clients out for some business development and cocktails after work. Others noted how they felt left out when client meetings turn to sports or guy talk. And many said they are hesitant to ask male clients out for drinks because they were worried that they might get the wrong message. “The sessions are really designed to help each other and be supportive of each other,” Jenifer said. “In fact, the women in Chicago said they wanted to turn this into a regular program and hold quarterly meetings.”

Although issues like work-life balance and career advancement are not of interest solely to women, women and men tend to have different perspectives. “A lot of the men have asked why we are holding these meetings,” Aine said. “We feel that it is important to recognize the fact that we are an environment that is mostly male. When you talk to other women, you realize that you aren’t alone. It’s not that men don’t struggle with these issues, they just approach things differently. The idea is to create a community of women that can support each other, mentor each other and share in each other’s successes.”