A Big Day in Memory of Big Lee 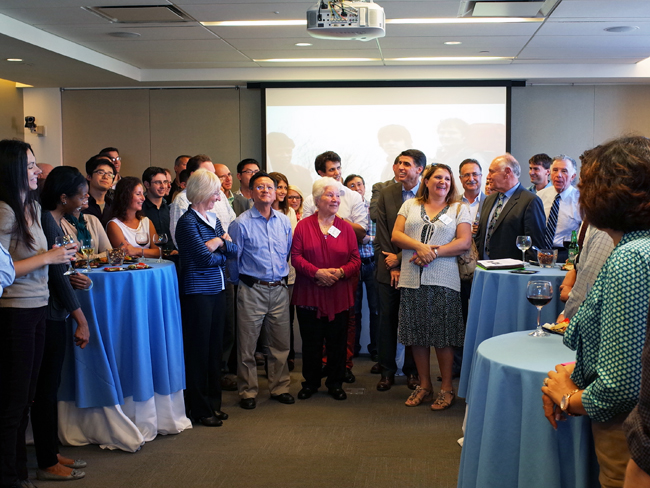 A little more than a year after the death of Vice President Lee Petrella, his Thornton Tomasetti colleagues, family and friends got together at a reception in the New York office to remember “Big Lee” and to formally announce a new scholarship that has been established in his name.

“Lee was a true engineer,” said Vice Chairman Dennis Poon at the Sept. 19 event. “If anyone ran into a problem on a project, they would go to Lee for help. In that way, he probably worked on every one of Thornton Tomasetti’s projects in his 32 years with the firm.”

A member of the Structural Engineering and Pacific Rim teams, Petrella was involved in many of the firm’s signature projects, especially those that were particularly complex or challenging. Following his death in August 2012 at age 54, Thornton Tomasetti’s board, along with Vice President of Human Resources John Fairbairn, reached out to a core group of Petrella’s friends from his college days at the City College of New York about establishing an internship and scholarship program at the firm. They then approached the engineering department at CCNY.

Elidion Gjoka is the first recipient of the Libero “Lee” Petrella Memorial Summer Internship and Scholarship. Gjoka, a senior engineering student at CCNY in his final semester, served as an intern in the New York office this past summer and received a $5,000 scholarship for the fall semester. He was invited to stay on at Thornton Tomasetti on a part-time basis. 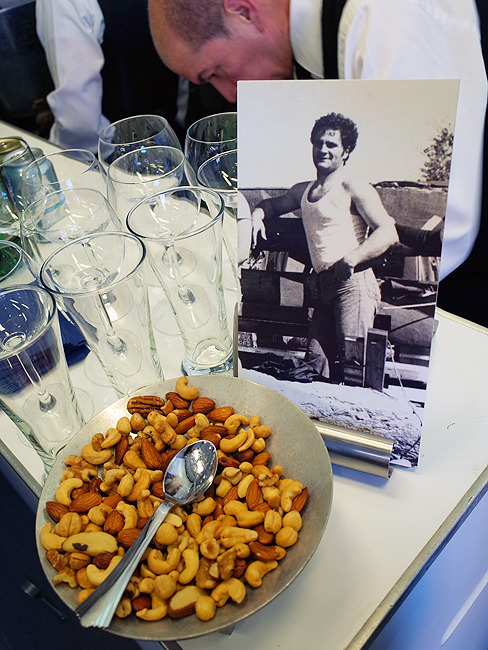 Classic photos of Lee Petrella, such as the one here used at a drinks station, as well as photos of his signature projects were on display at the reception. Photo by Vakaris Renetskis.

“I would like to thank Thornton Tomasetti for awarding me this prestigious scholarship and offering me the opportunity to work here,” Gjoka said during the reception. “It has been, and it continues to be, a constant learning experience. It is because of this internship that I have decided to pursue a graduate degree in structural engineering. I would also like to thank the friends and family of Big Lee. I really have no words to describe how much all of this means to me.” 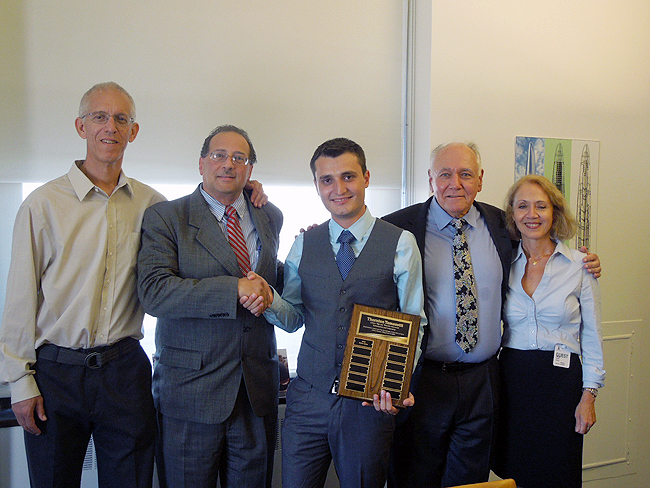 This year’s applications were reviewed by a panel comprising Vice President Steve Szycher and Petrella’s longtime friends Ed Nachtmann (a Thornton Tomasetti alumnus), a structural engineer at Dewberry & Davis; Roy Goldman, associate/resident engineer at LiRO Engineering; and Paul Roppa, director of bid process management at the New York City Department of Design and Construction. The candidates were evaluated on such factors as academic accomplishments, career goals, a specialization in structural design and service contributions to the CCNY civil engineering department and fellow students.

“Brilliant people like Lee see the world differently than we do,” Nachtmann told the group. “Lee’s world consisted of his family and his passion for structural engineering. Lee was most comfortable doing calculations and analyzing the details of structural members and their connections. He was extremely thorough in his review work.” Nachtmann recalled once seeing Petrella holding a shop drawing in front of a restroom mirror to check a braced frame detail marked as “opposite handed.” 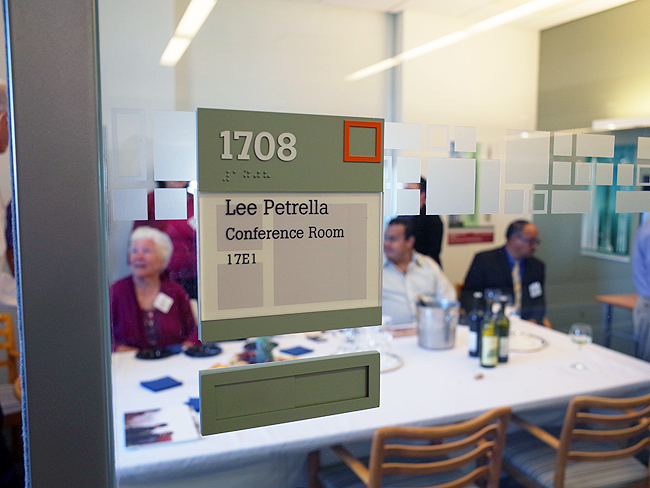 In addition to the internship and scholarship, a conference room in our New York office has been renamed in memory of the former vice president. Photo by Vakaris Renetskis.

Also at the reception were Petrella’s mother Giuseppina Petrella, sisters Tina Christenson, Antonietta Florio and Rosanna Rizik as well as other family members. “Growing up, Lee wanted to be an engineer,” Rizik said. “He said, ‘People are going to remember me by my designs and my buildings long after I am gone.’ And they will, thanks to his work at Thornton Tomasetti.”

Vice Chairman Aine Brazil recalled how Petrella was extremely thorough and understood how it was the duty and responsibility of engineers to design buildings that are safe for those who occupy them. 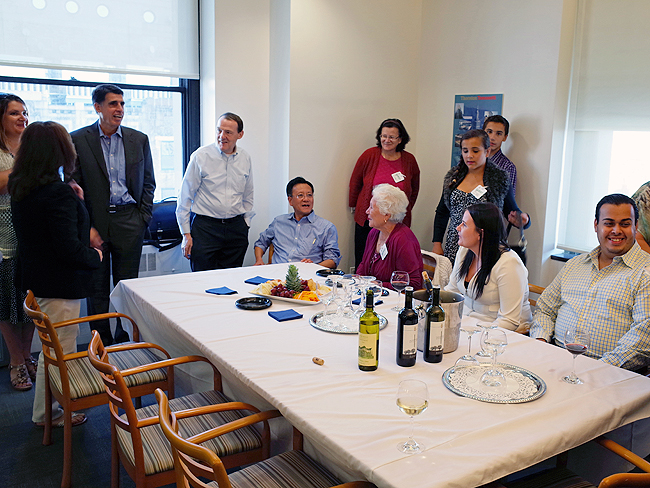 Chairman and CEO Tom Scarangello also shared a few stories about his longtime colleague. “I was lucky enough to have been the engineer of record for Ford Field, the football stadium in Detroit,” he said. “But everyone who was working for the firm at the time knew who the key team member was for the design of the roof. It was Lee. Every year at Thanksgiving, when the football game is on, I look at Ford Field and see Lee’s roof. He made us all smarter and better engineers.”

In addition to the scholarship, New York office conference room 17E1 was renamed the Lee Petrella Conference Room in his honor. Prior to the reception, Petrella’s family and other invited guests got a chance to see the room and talk to those at Thornton Tomasetti who knew him best.

At the reception, which was organized by Manager of Administrative Services Lyn Stevens and Manager of Office Services Dorian Soler, Scarangello told the backstory behind Petrella’s nickname. “We called him Big Lee,” he said. “And it wasn’t just because he was a big man in terms of size, but he also had this big brain and an even bigger heart.”