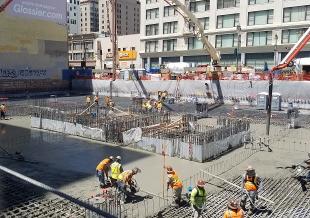 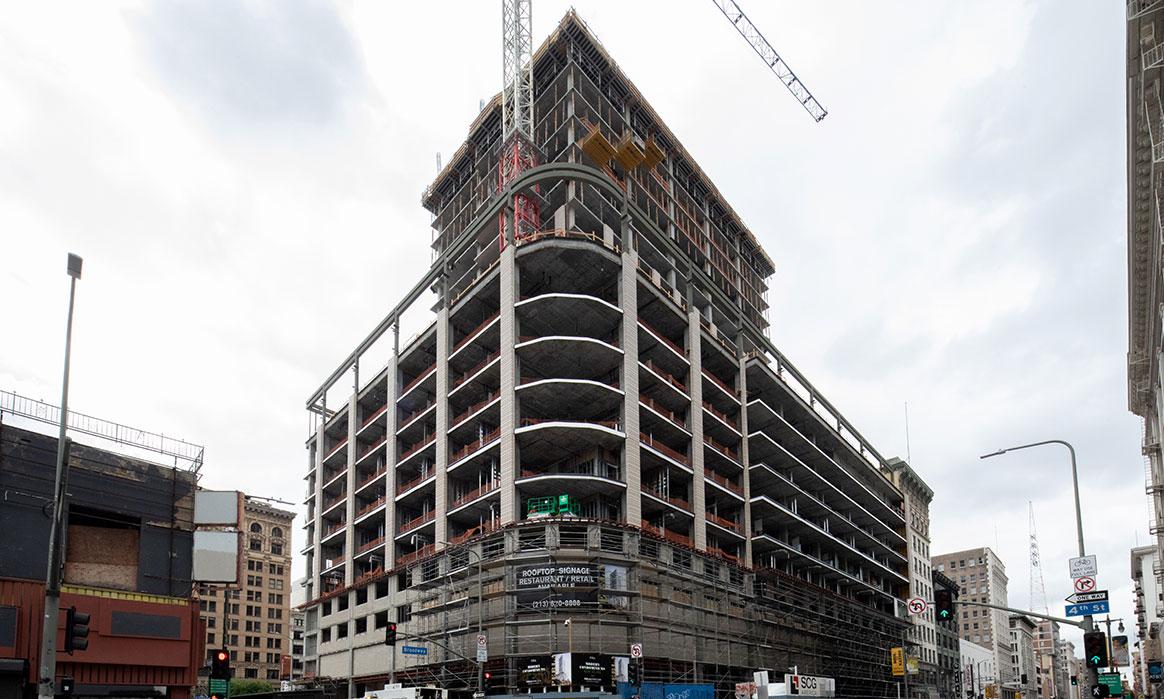 The Los Angeles Historic Core neighborhood was buzzing with activity last Saturday, as 690 truckloads of concrete was placed for the foundation of the Perla on Broadway residential project. Thornton Tomasetti is providing structural engineering and performance-based design services to developer SCG America for the 35-story, 740,000-square-foot tower and 10-story podium. Designed by architect CallisonRTKL, it is the first new residential high rise to be constructed in the historic neighborhood in more than a century.

Five concrete pumps took their strategic spots along 4th Street and Broadway, and at 7 a.m. began pouring concrete for the 11-foot-deep tower mat slab and 5-foot-deep podium foundations. Over the next 13 and a half hours, a total of 6,555 cubic yards (nearly four miles if placed end to end) of concrete was poured.

“After working hard with the contractor to resolve some final coordination items, we were very happy to see the mat foundation pour executed on schedule,” Ola Johansson, the principal in charge of the project, said “Coincidentally, a few of Thornton Tomasetti’s project team members live just blocks away, which makes this even more exciting.”

When completed in 2020, Perla on Broadway will contain 450 condo units, ranging from 400 to 1,300 square feet, and 7,000 square feet of ground-level retail and commercial space. Topped by a pool deck, the podium will provide six levels of parking for up to 450 vehicles and 500 bikes. The podium and tower’s combined 48,000 square feet of outdoor space will feature lounge areas with fire pits, kitchens and grills.

Due to its historic location, the project entitlement came with strict architectural requirements for building materials and massing. Among these were limitations on floor area as well as the tower and podium’s heights and setbacks. An architectural challenge was finding harmony between the historically inspired façade design and podium base massing, and the traditional materials and massing of the surrounding buildings.

Thornton Tomasetti’s structural performance-based design gave the architect flexibility to achieve the intended design vision, including tall, open residential units with floor-to-ceiling windows without view-obstructing beams. The rigorous PBD approach considered site-specific seismic conditions and realistic ground motions and required a detailed modeling of the structural frame. This resulted in a comprehensive understanding of the structure’s behavior, which ultimately led to a better structural design. Other benefits of PBD were reduced construction time and cost.

“We are thrilled to be part of the SCG America, CallisonRTKL and Swinerton team building this landmark project, which is revitalizing downtown L.A.’s Historic Core,” Ola said.