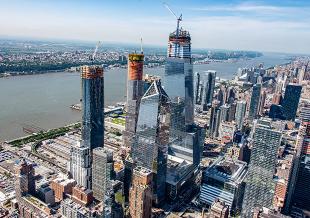 Thornton Tomasetti’s big goal is to be the global driver of change and innovation in our industry. We pursue this goal, in part, by developing solutions for the next era of sustainable design and by creating early design tools that advance the analysis of sustainability opportunities. We find that innovation flourishes when diverse teams collaborate across disciplinary boundaries. Our featured 2018 sustainability innovations have broadened our understanding and heightened attention in the industry to the significance of embodied carbon’s impact on a building’s carbon footprint, helped to speed up the optimization of sustainable designs, and may eventually produce a sustainable settlement on Mars.

Keeping Tabs on Our Embodied Carbon

The Embodied Carbon Lab, which studies embodied carbon for the development of industry-wide benchmarks and strategies for low-carbon buildings, has contributed to industry research since 2012 and has amassed a database of 469 Thornton Tomasetti structural projects analyzed for embodied carbon. As a Platinum-level sponsor of the Carbon Leadership Forum, we have contributed to the growing awareness of the global-warming potential of building materials and the inclusion of life-cycle analysis in influential green-building certification programs. We are proud to be an early leader in this burgeoning area of design, and of being a co-initiator of the Structural Engineers 2050 Challenge.