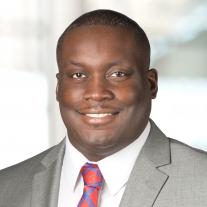 The 110-story Willis Tower (previously known as the Sears Tower) was completed in 1974 becoming the tallest building in the world— a title which it held for nearly 25 years. This renovation provides Willis Tower with a massive "base-lift" to expand the retail and tourist experience at the building’s first six levels. The existing plaza is replaced with a three-story retail structure featuring a winter garden with a grid shell skylight, 300,000 square feet of new retail, dining, and entertainment, a belowground entrance to the Skydeck, and a rooftop green space that is open to the public. Thornton Tomasetti provided integrated structural engineering, façade engineering, construction engineering, and protective design services to realize the owner's vision for this iconic tower.

But making significant changes to an existing building that has stood for more than 50 years brings unique challenges. First and foremost, the tower needed to remain open and in operation throughout construction. And how do we construct a new three-story podium on top of an existing structure and distribute the load from above down to the existing superstructure without adding any new foundations? 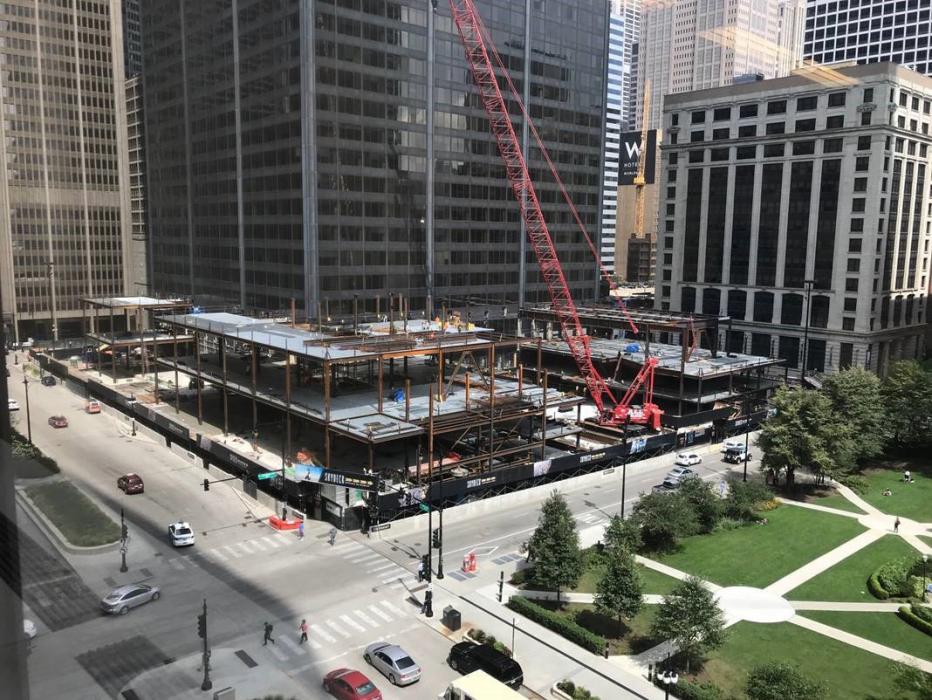 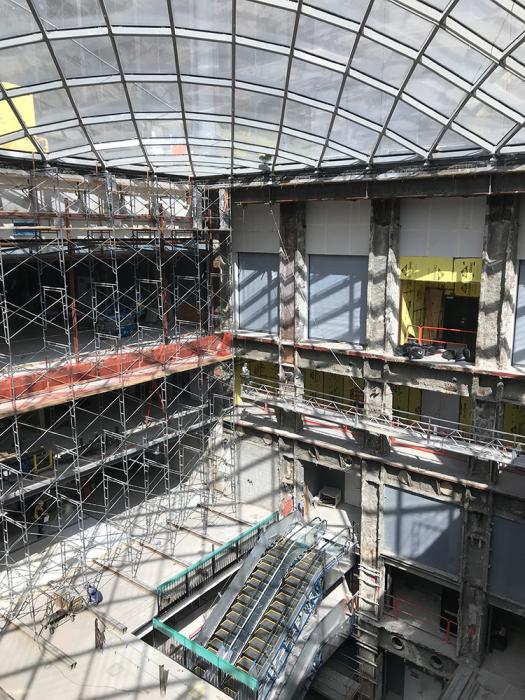 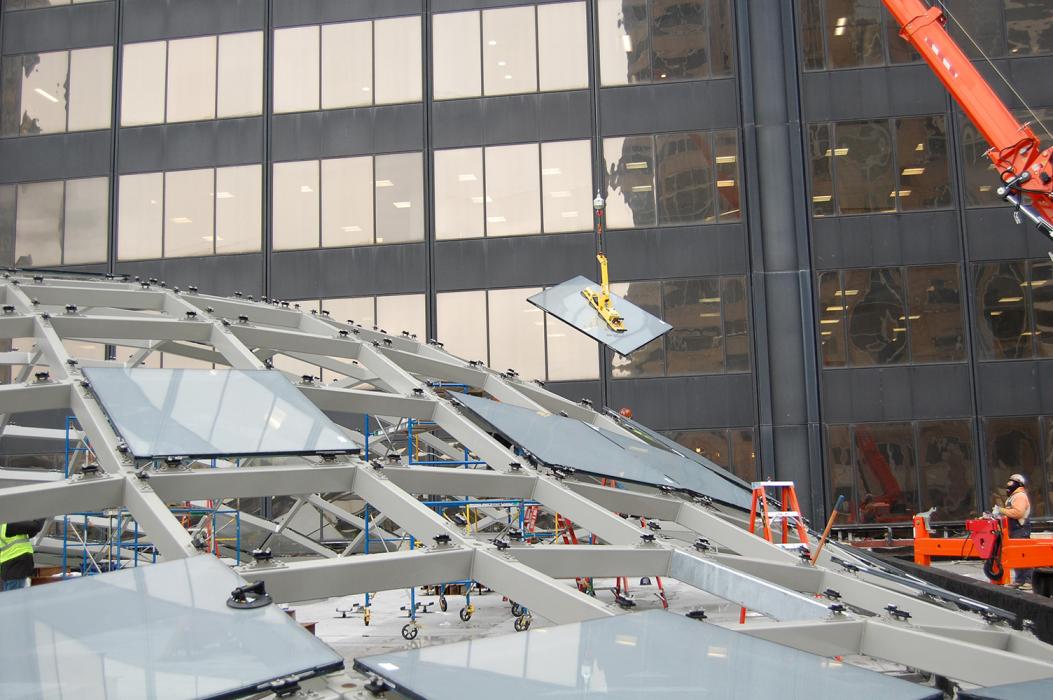 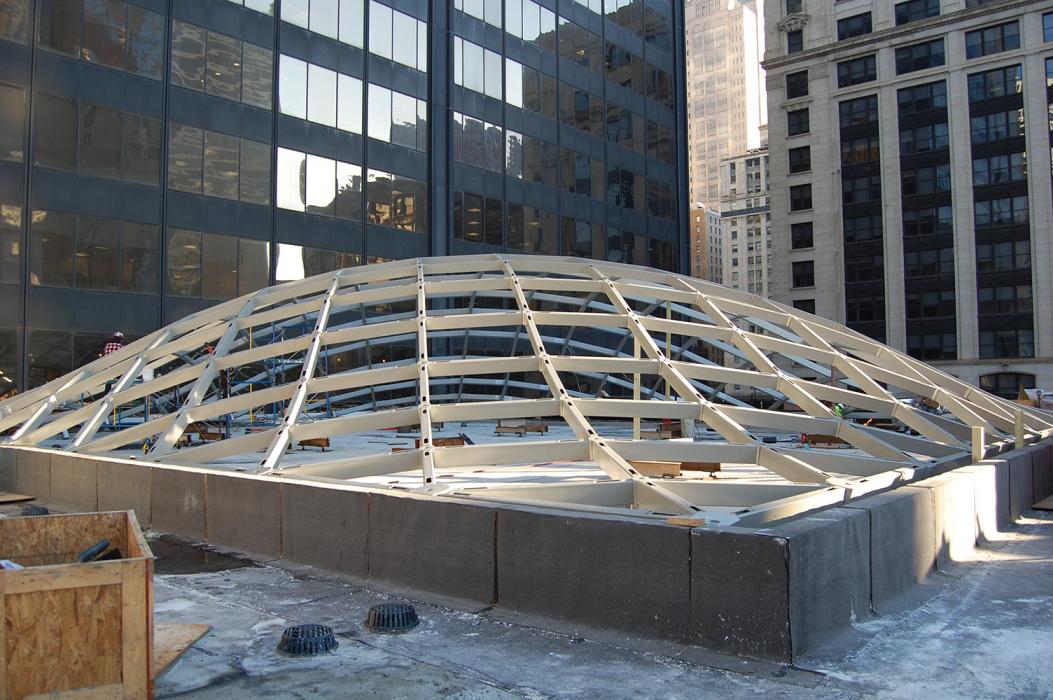 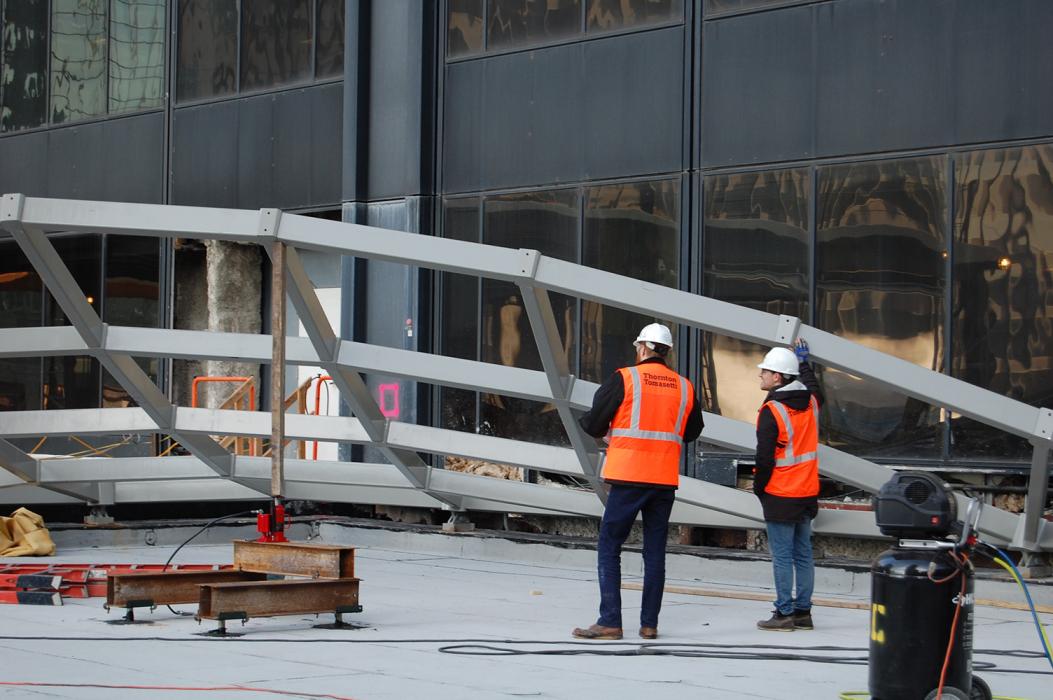 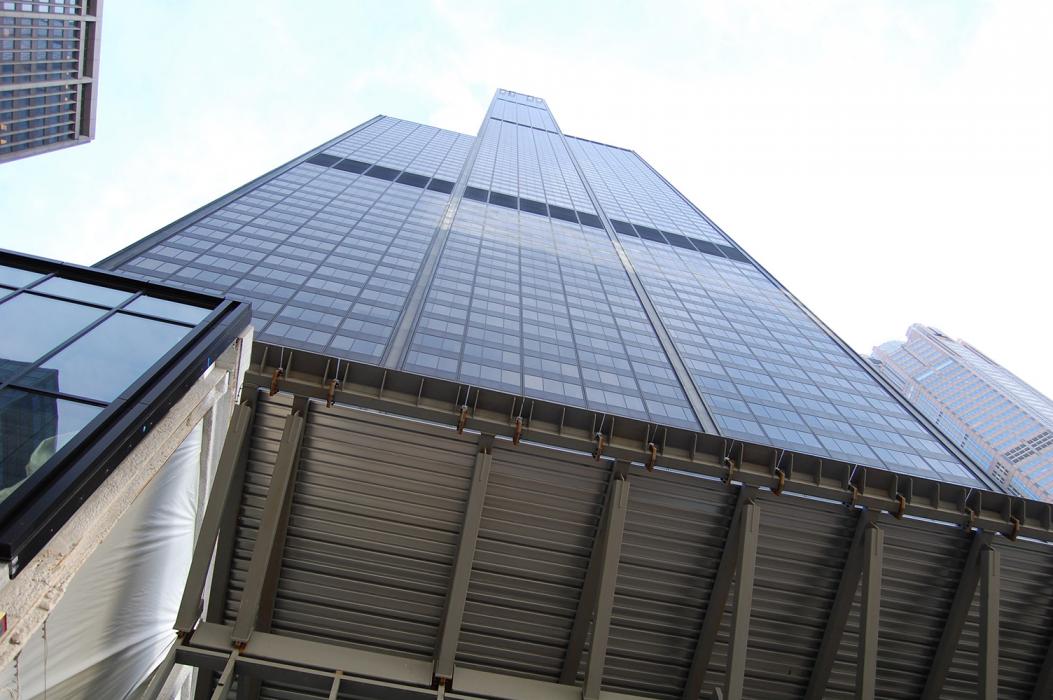 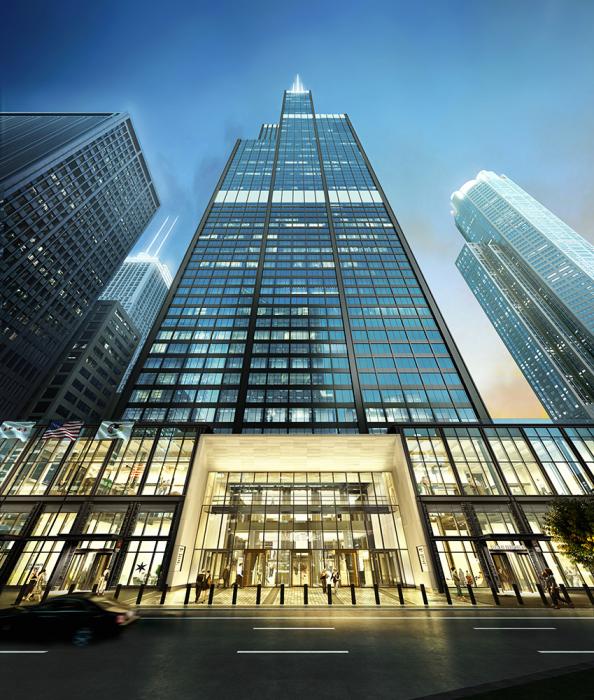 Bringing the Architectural Vision to Life

The architect designed the podium's column grid to match the 15-foot module of the Tower. However, the belled caisson foundations of the existing podium have an irregular layout with varying capacities. To distribute the load from the current to the existing column grids, we designed 72 transfer columns and approximately 80 transfer girders.

This was an iterative process and required close coordination with the architect. To filter through the architectural and structural data, our engineers developed spreadsheet tools that allowed us to clearly see which caissons were near capacity, which ones were at capacity, and which ones we could use to distribute more load. It was critical that we were able to filter and sort this information quickly and accurately because while this information might change from week to week or even day to day, we always needed to know that the load was distributed properly.

This strategy allowed us to optimize a design requiring no new foundations. Several of the transfer beams supporting the new columns are W40x503 sections - the heaviest steel shapes available in the United States.

Most of the lower-level plaza columns outside of a planned but unbuilt hotel footprint could not support more than one additional floor. Our engineers determined that approximately 20 columns required strengthening to support the vertical addition. We encased the existing steel wide-flange columns in concrete and welded headed studs to the column webs to share the load between the steel section and the concrete encasement. Where existing site constraints prohibited concrete encasement, we designed partial-height plates welded to the existing column flanges.

We worked with Terracon, the geotechnical engineer, to determine if the soil around the existing foundations could provide a higher bearing capacity. By employing various strategies including drilling through existing caissons and performing in-situ soil tests, we determined that the soil compacted by the existing building over the past 40+ years provided the increased bearing capacity that we needed to support the new podium structure.

The architect wanted a new stair connecting the street level to the second level, but the proposed intermediate landing passed through three existing 42-inch-deep spandrel beams. To accommodate the stair, we lowered the spandrel beams by three feet. We developed a 3-D analytical model of the Tower to understand the increase in force on the existing surrounding columns and girders that remained. Based on the results, we developed reinforcing details to locally increase the strength the stiffness of the existing beams and columns around the stair. To accomplish this feat of engineering while the Tower remained fully occupied, we also developed the sequence to demolish and add the spandrel beams.

Putting A New Face on a Classic

We took a high-tech approach for a new 75-foot by 90-foot skylight over the new "Catalog" atrium. We rationalized its form into a logical and economical design comprising a doubly-curved shell with planar glass panels. Novum Structures, who was introduced during 95% Design Development of the grid shell, carried out the final design and detailing. The design consisted of an AESS Category 2 stick-built system using high-strength bolted moment connections at each node. Access holes on the top faces of the steel tubes allowed the tension bolts to remain hidden and eventually be covered by the glazing.

Designed with Safety in Mind

More than 300 steel pipe bollards stand sentry around the new podium, designed to protect pedestrians and building occupants from accidental or intentional vehicle impacts. Their simple appearance above grade is akin to an iceberg above the surface. But below the sidewalks, reinforced concrete grade beams support the bollards. Dense urban environments like Chicago have myriad existing below-grade structures that constrain and conflict with these footings. We customized the footings to squeeze past high-voltage equipment rooms, avoid fire hydrants, span over manholes, skim the edges of tree planters, and retain maintenance access – all while marching in an orderly line down each block. Along the Wacker Drive viaduct, we integrated the bollard footings with the building's elevated structural slab.

From Start to Finish

Our job isn’t done when the design is ready to go. Our Construction Engineering team provided structural engineering expertise to assist the general contractor, a joint venture between Turner Construction Company and Clayco, in detailing and sequencing renovations. From permanent connection design to temporary shoring and bracing designs, our Construction Engineers were involved every step of the way. In addition to connections, we also designed temporary supports for the building as it underwent selective demolition tasks, which included slurry wall brace design, temporary column bracing, temporary support of utility pipes, review of crane and equipment loads, and construction and demolition sequencing.

By adequately addressing and respecting existing conditions, the design and construction team set the stage for creating the elements that would make a half-century-old building seem new again. Through steel technology and, more importantly, collaboration and creative thinking across the project team, this update provides a new appreciation for—and a new way to enjoy—this landmark tower.