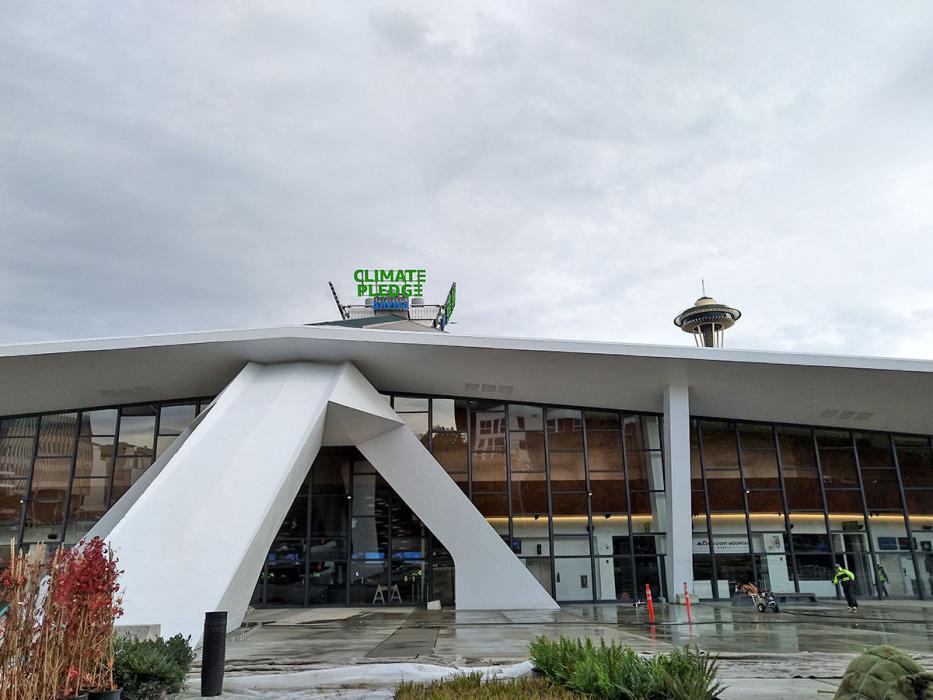 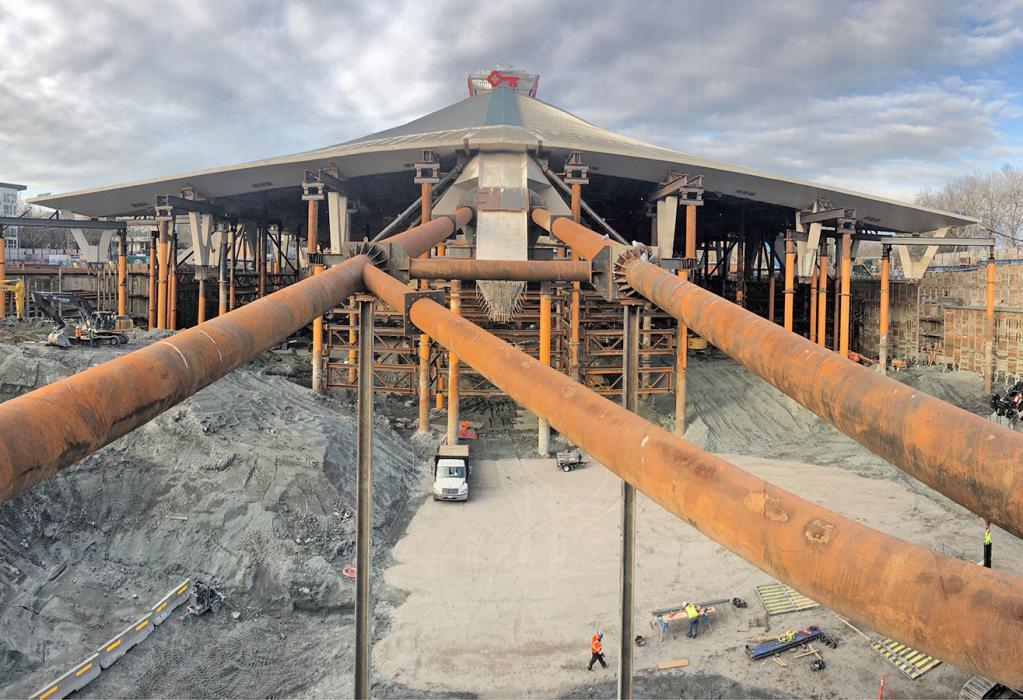 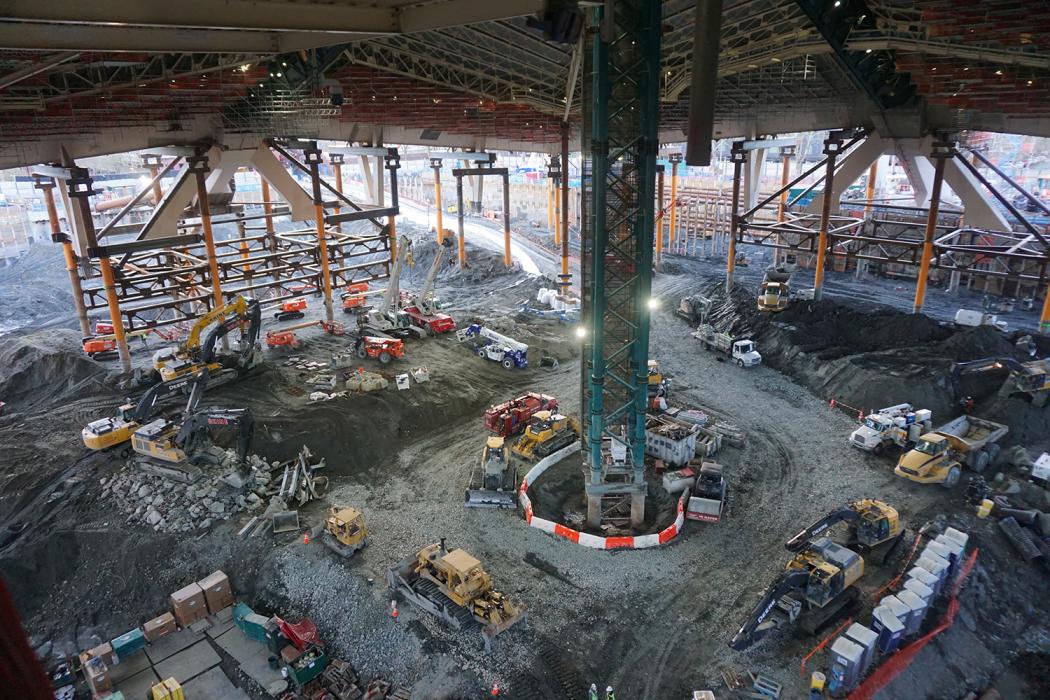 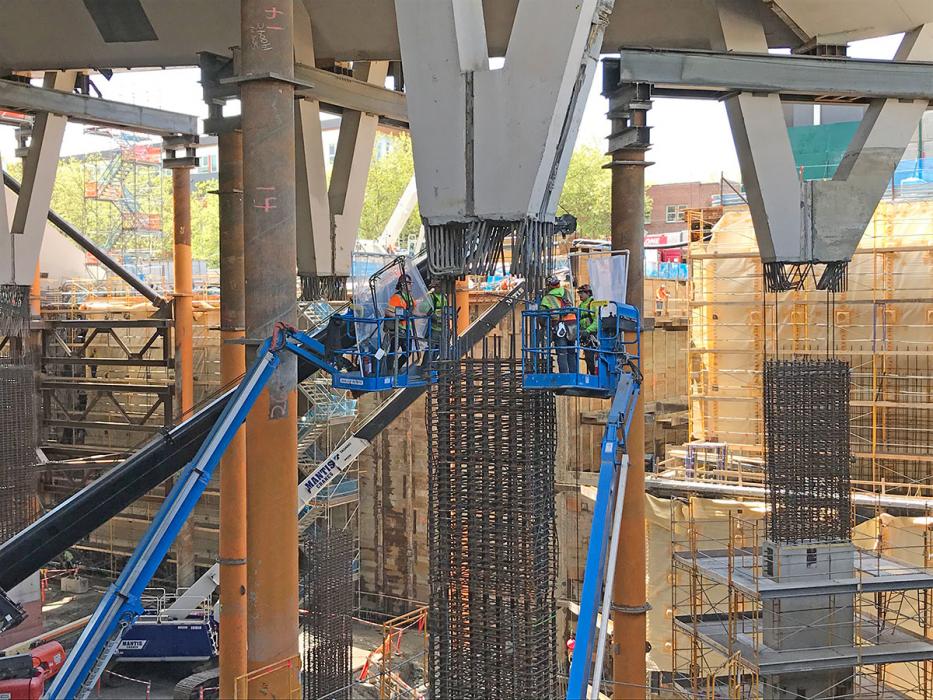 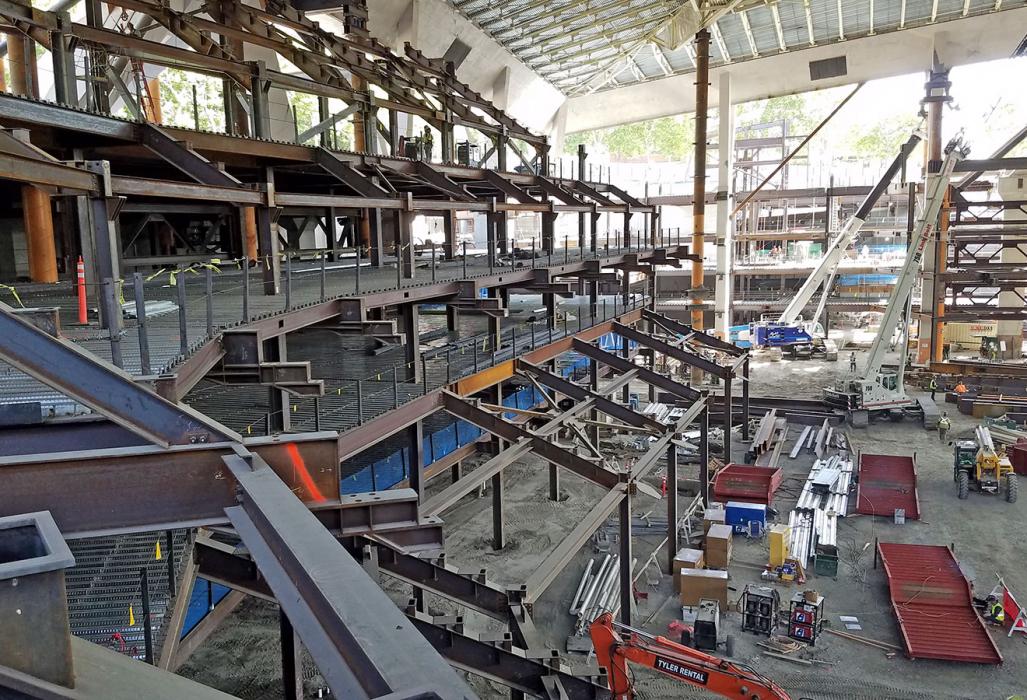 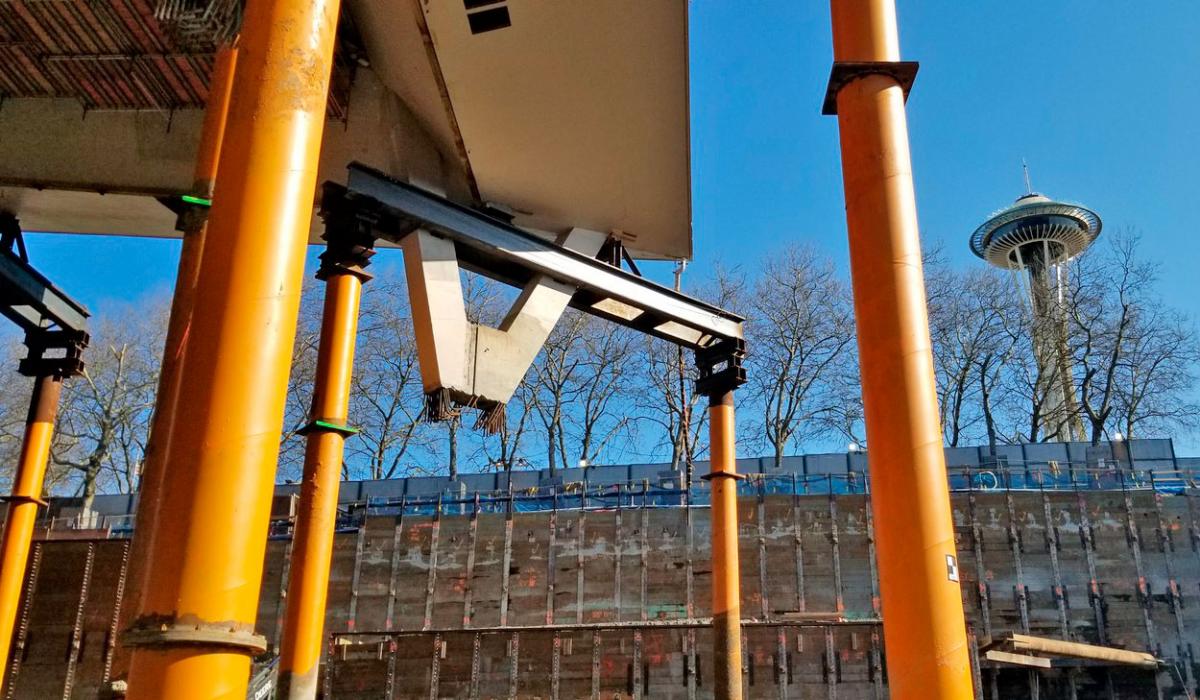 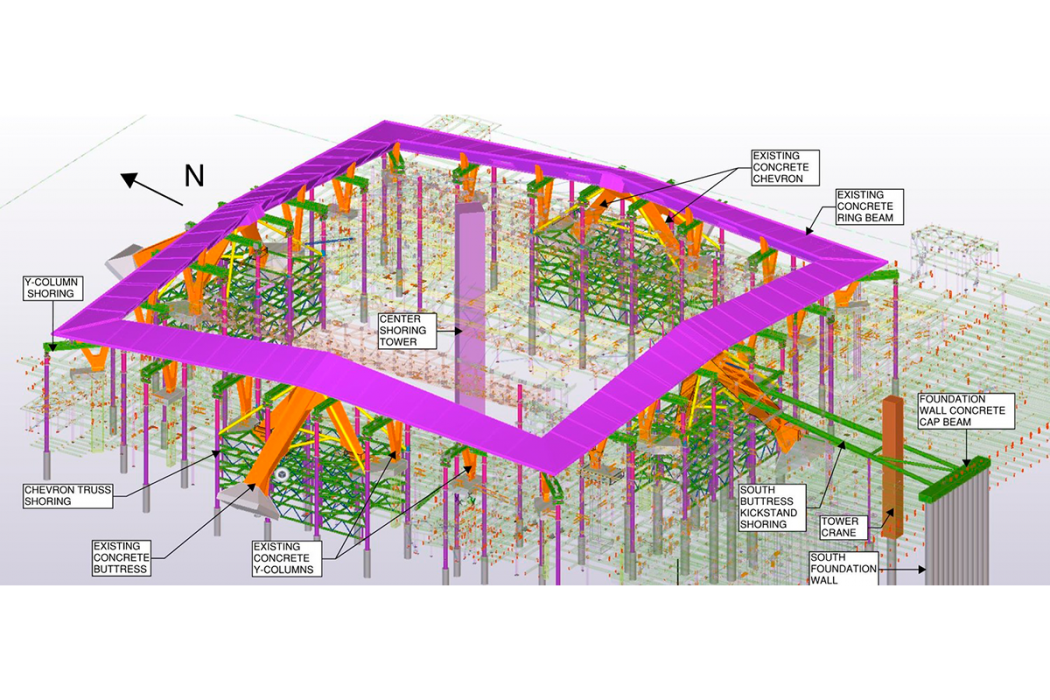 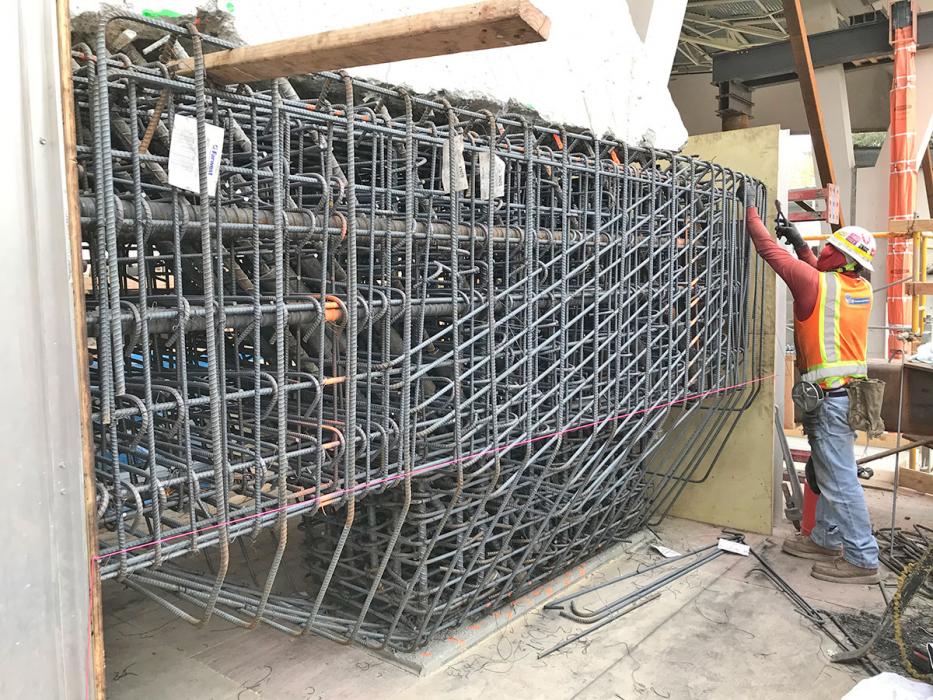 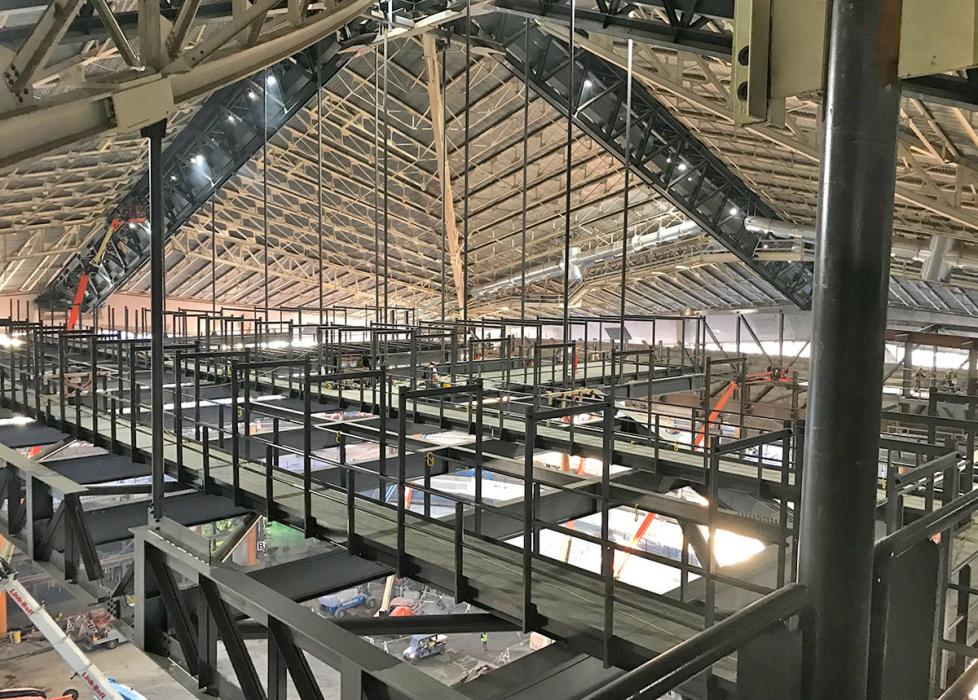 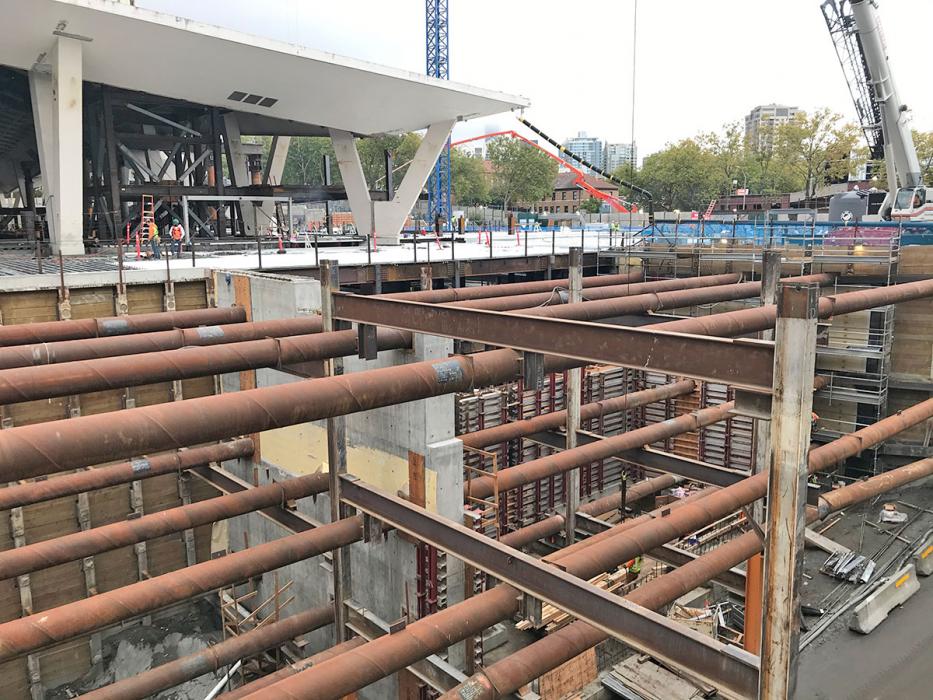 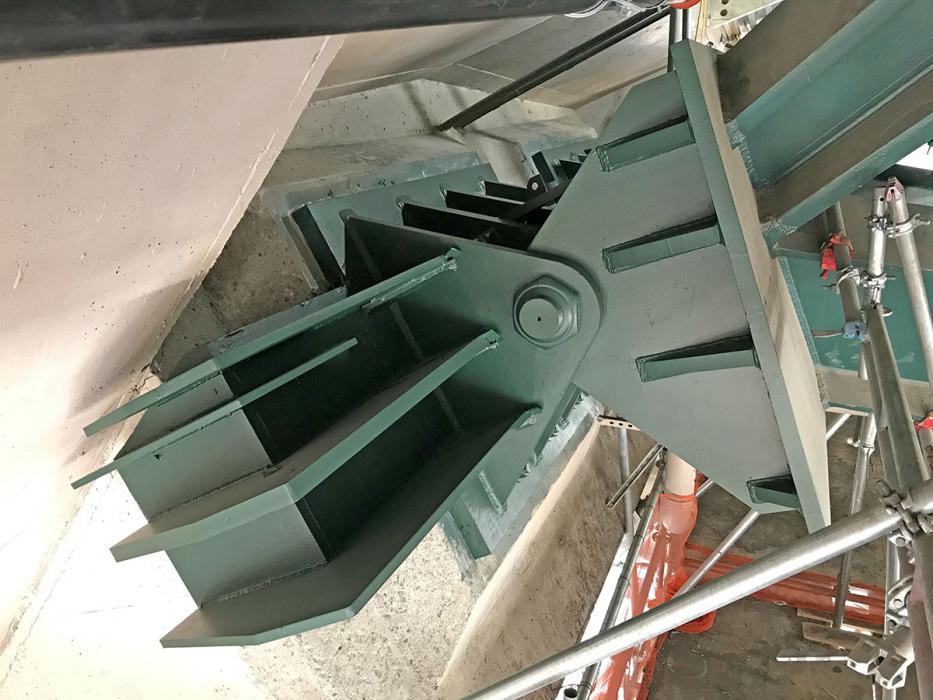 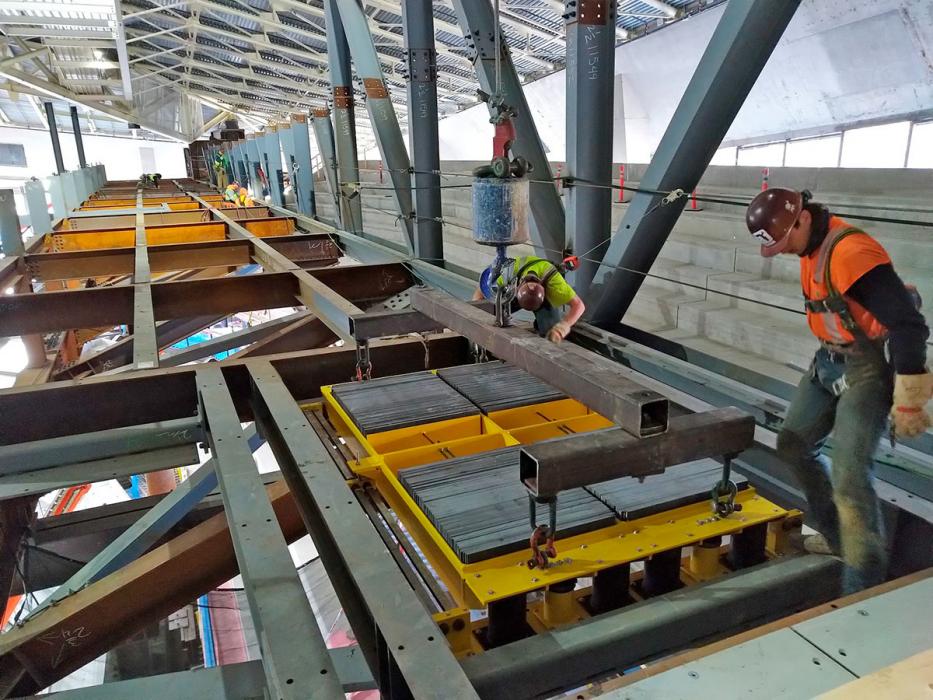 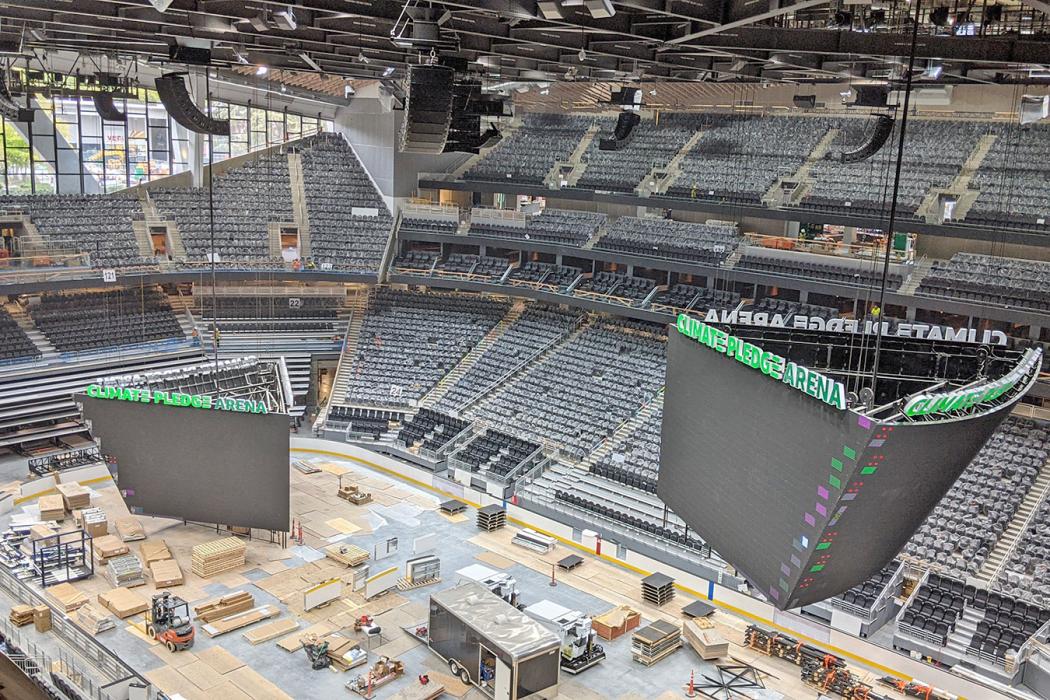 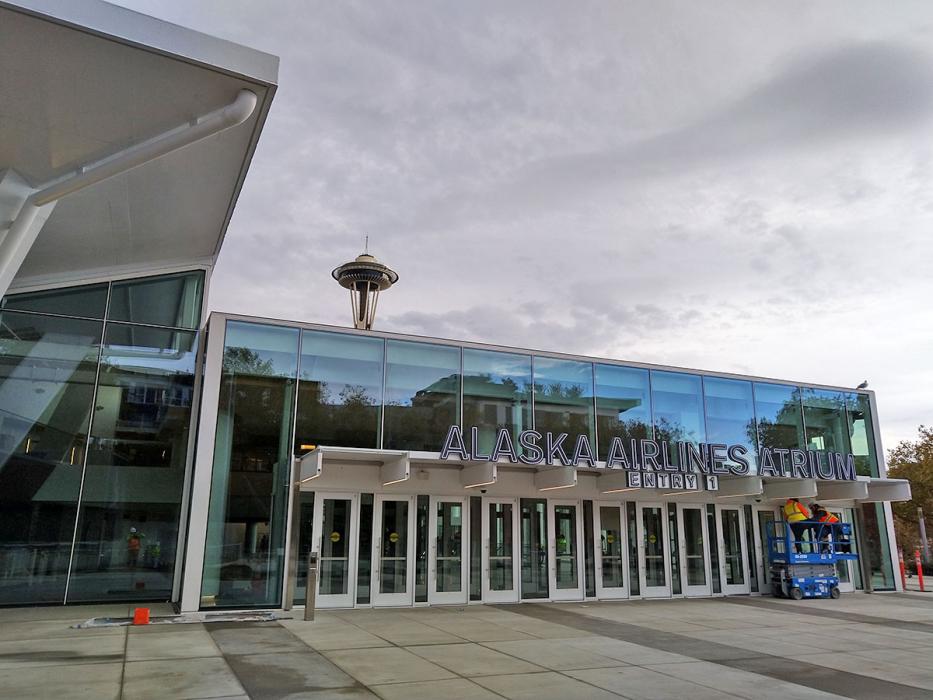 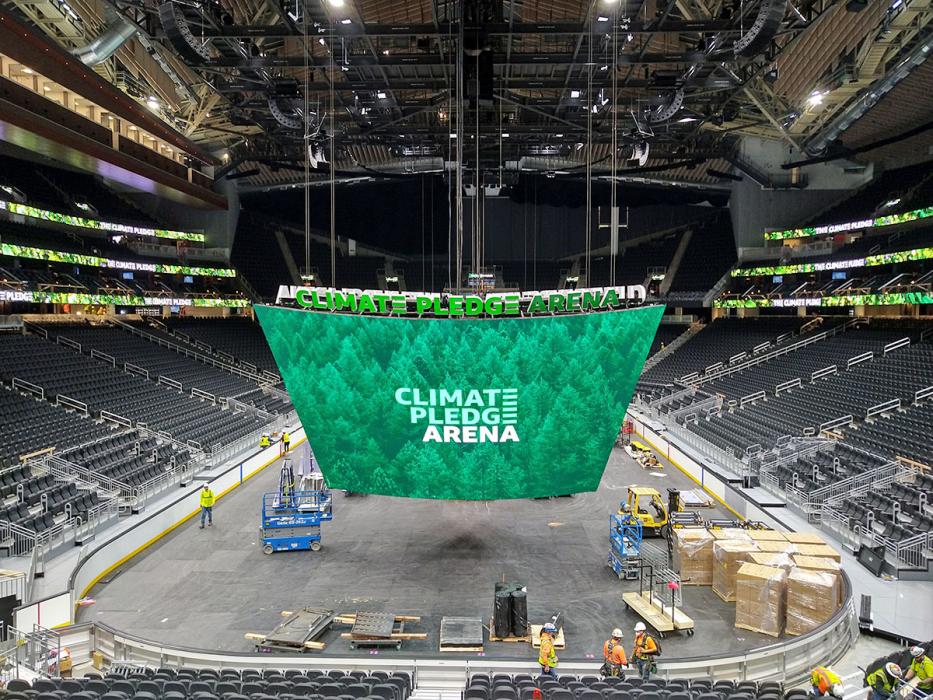 The historic KeyArena, which started out as the Washington State Coliseum for the 1962 Seattle World’s Fair, has undergone a major transformation, becoming home to the NHL’s newest franchise, the Seattle Kraken. The $930 million renovation and expansion is now Climate Pledge Arena, a new 800,000-square-foot, below-grade venue that will hold more than 17,000 fans for hockey, basketball, concerts and other events, as well as a new parking garage. Thornton Tomasetti provided structural design and construction engineering for the renovation.

But what makes this project unique? It preserves the 1960s-era building’s iconic 44-million-pound roof structure and the exterior curtain wall. The near-total demolition of the structure below the roof presented several complex challenges. Most notable among these was how to demolish the structure and excavate 680,000 cubic yards of soil to make way for construction of a new world-class below-grade arena, all while temporarily supporting the roof structure above it. Complicating matters further were the arena's location in a high seismic zone, just two miles from a fault line, and the project's very aggressive schedule.

We provided structural and construction engineering services to Populous for renovation of the 800,000-square-foot arena, which opened in time for the NHL's 2021-2022 season. 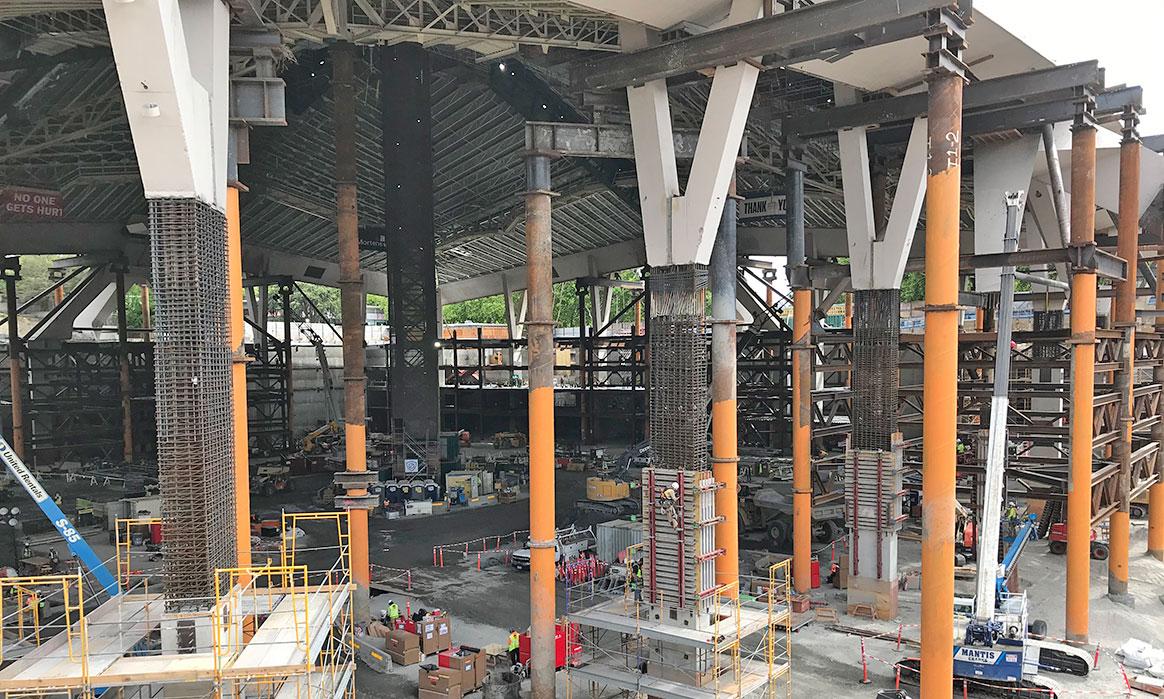 The steel and concrete structure that now covers the arena was designed by modernist architect Paul Thiry in the late 1950s and constructed in 1961. In fall 2017, KeyArena was classified by the Seattle Landmarks Preservation Board as a local landmark. This distinction required that the roof, curtain wall and exterior concrete elements be preserved as part of the renovation. The central structural feat became how to support the existing roof while work continued below it. This challenge drove nearly all facets of the project’s design and construction.

How do you support a roof the size of three football fields, weighing more than eight 737 jets, in a high seismic zone, while construction work occurs beneath? With plenty of expertise and ingenuity. Since the foundations below existing columns would be undermined by the excavation for the new event level, our engineers designed a temporary roof-support system entailing 3,700 tons of temporary steel framing to uphold the majority of the roof’s gravity load and resist wind and seismic lateral forces during two years of construction. The historic roof had to be supported in the air during the demolition of the remaining structure without incurring damage, while also allowing sufficient access and clearance to install the permanent structure around the temporary structure.

Evaluation, design and construction planning for the temporary lateral force-resisting system required extensive collaboration among project team members. The system configuration changed continually as excavation progressed. As areas of excavation proceeded in alternate quadrants, the contractor installed bracing trusses as soon as soil removal allowed. Work sessions with the construction manager and steel, excavation and foundation contractors resulted in a series of colored maps defining the critical stages of analysis and design coordinated with construction activities.

Building a Ship in a Bottle

The design and construction of a new steel-structured arena below the temporarily supported roof and around the temporary shoring was much like building a ship in a bottle. The arena, which will be the first net-zero carbon certified venue in the world, consists of a new event level 15 feet below the existing undersized event floor elevation, four complete arena levels at and below the surrounding grade, and two levels above the surrounding grade. All the levels extend to or beyond the perimeter of the existing roof. The typical floor construction consists of composite steel beams with concrete slab on metal deck. Precast concrete stadia units supported by steel rakers provide framing for the new bowl seating. On the west side of the arena, a new press-level bridge floating above the seating bowl is supported by two trusses spanning 275 feet between the new steel-framed elevator cores. Slide bearings between the new elevator core steel and the existing roof structure seismically isolate the roof from the new bowl structure below.

The columns that support the existing roof were extended down to the event level and once again support the gravity load of the nearly 60-year-old roof. These columns support local gravity loads from the new arena floor, while being isolated from seismic forces. Buckling-restrained braces in the elevator cores resist lateral loads, while tuned mass dampers control vibrations in the long-span floor system.

We also employed performance-based design for the existing structure to avoid retrofitting the existing concrete roof elements and achieve a significant reduction in the number of steel roof members requiring retrofitting due to seismic loading.

Saving Time and Cost With APD

On complex projects like this, an integrated approach to solving challenges is critical to overall success. Thornton Tomasetti provided Advanced Project Delivery (APD)™ services, which helped to achieve considerable schedule and cost efficiencies. Our construction engineering and structural design teams worked in parallel with the steel contractor to provide a fully coordinated and connected Tekla model for the 8,700 tons of permanent steel for the arena and parking garage, while producing full shop drawings for the 3,700 tons of TRS structural steel. With APD, the team was able to accelerate the steel procurement and detailing process. This enabled fabrication to begin much earlier, shaving approximately four months off the schedule.

The transformation of Seattle’s historic KeyArena into the world-class Climate Pledge Arena required the near-total demolition of the old structure and construction of a new one, all while keeping its unique roof and façade intact.

In sports, you need a strong team and an effective strategy to be the best – and the same can be said for sports venue design. Efficient collaboration among a single-source structural engineering firm team and experienced, familiar fabricators and construction management was instrumental to the success of the Climate Pledge Arena project. When the Seattle Kraken take to their new home ice, the project team can cheer them on, taking great satisfaction in a job well done. 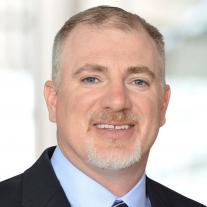 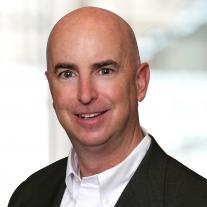 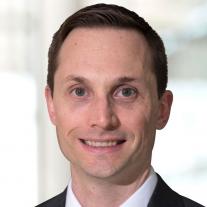 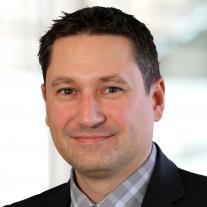 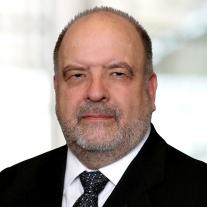 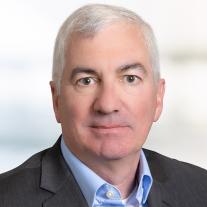 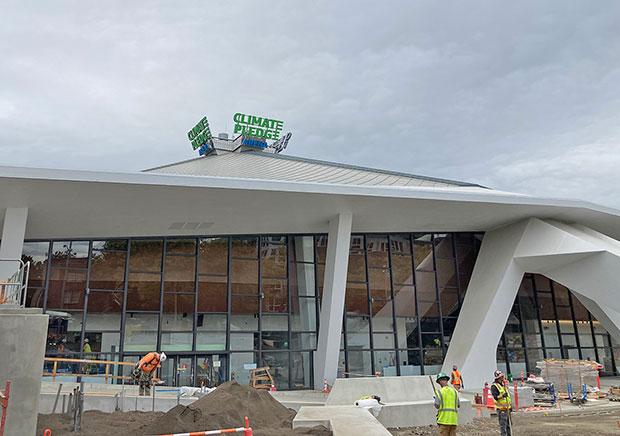 Venues Now: Why an Iconic Roof Designed for the 1962 World’s Fair Tops the NHL’s Newest Arena Seattle’s new Climate Pledge Arena is a unique blend of the historic and state-of-the-art. 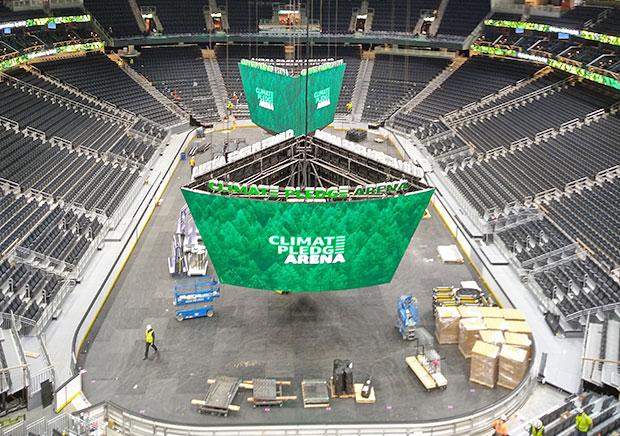 Modern Steel Construction: Inside Job While it may look familiar from the outside, step through the doors of Seattle, Washington’s Climate Pledge Arena and it’s an entirely new state-of-the-art sports and entertainment venue. 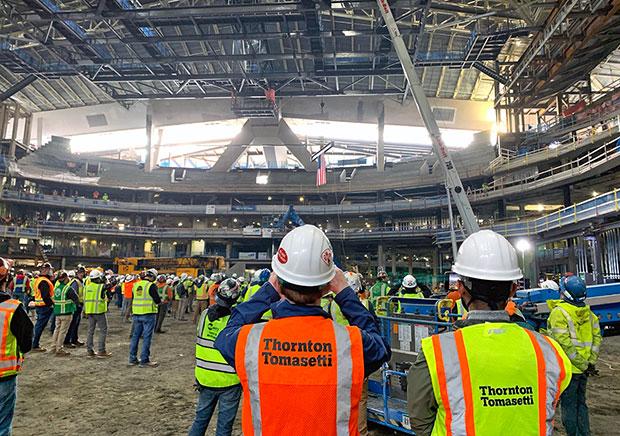 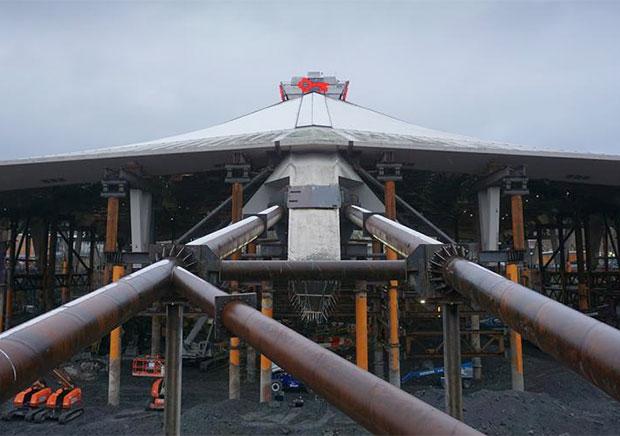